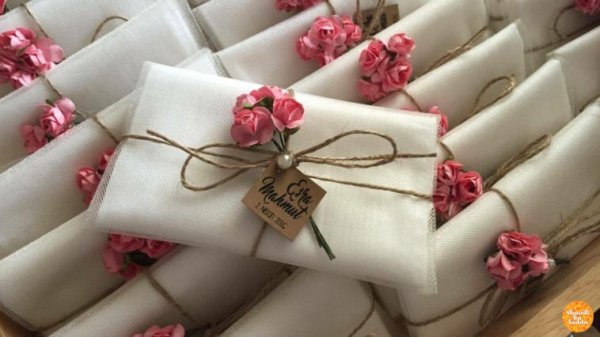 Monetary gifts in shagun envelope have been a tradition for a long time. The amount you would like to gift a person depends on you. But, leave the choice of shagun envelopes to us. We have sorted that for you! Experts from BP Gift Guide bring to you 10 handmade shagun envelopes of various designs ranging from a simple envelope to an ornate mini purse. Choose one that strikes your fantasy and make your point in a fashionable way.

What Can You Gift as Shagun Apart from Cash? 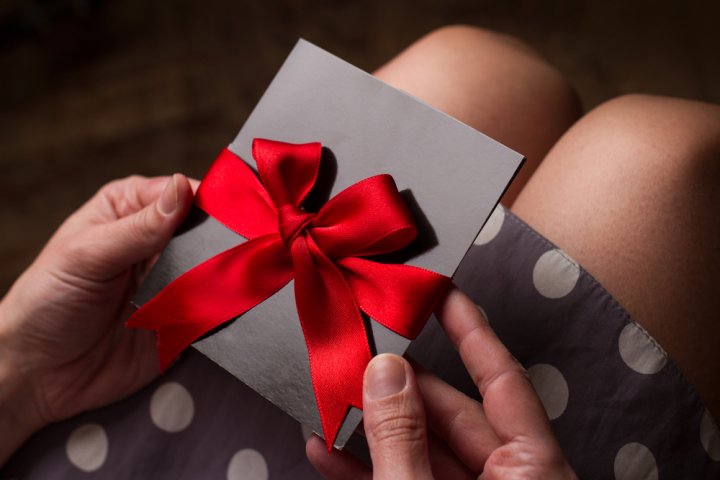 Cash is something that is given in almost any weddings, gatherings and festivals in India. It is considered a blessing from the elders. However, if you are bored of gifting cash to your recipients, then you can try something different. Think about some practical and useful options for gifting purpose.

You can always opt for gift vouchers. They are a great gifting option. You can select a departmental store or a fashion store of your choice and gift them a voucher from there. It is almost like cash only but at least you can have a choice of the store. So, it adds a little bit of personal touch to your gift.

Apart from that, these days even movie theatres and hotels give gift card vouchers. If you know that the recipient loves to travel or watch movies, then you can gift something like this. It is a unique and different gift. Imagine someone paying for your movies for 3 or 6 months. Isn't it exciting? Hence, try gifting a gift card next time.

Get Practical with Clothes 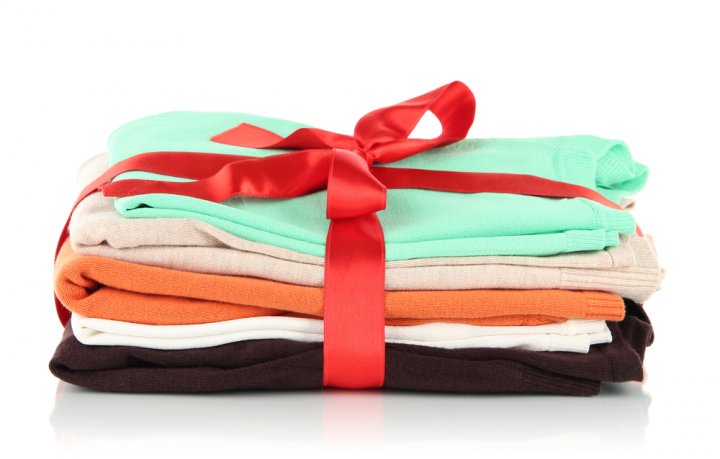 Clothes are something that you can gift to anyone. They are the most practical form of gifts. When you are looking to gift something during weddings and festivals, then clothes work the best. People can use it during functions as well.

You can choose to gift dress materials if you do not know the exact size of your recipient. Apart from that, you can always gift fabrics too. You can gift just dupattas to women as well. When it comes to men, a solid colour shirt works the best.

If you know the exact size of the recipient, then try buying an anarkali suit or a long ethnic gown. Avoid buying western dresses. Traditional dresses look great as a gift during such times. Clothes can be gifted to kids as well during such functions.

Sweets Work in a Pinch 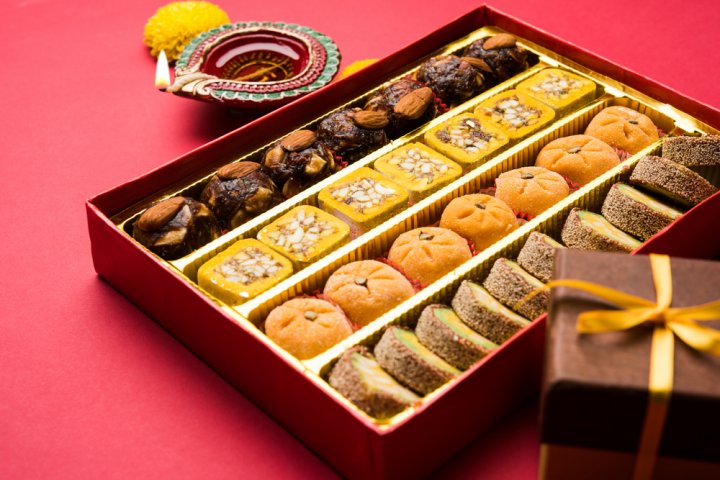 If everything else fails, opt for sweets. They make a great gifting option. People usually exchange sweets in India when there is a celebration going on. Thus, sweets are fantastic gifts at a festive gathering or wedding.

Sweets work well if you are visiting a colleague or an acquaintance. It is usually considered as a bit of good luck too. Just make sure that you pack the sweets in fancy boxes. Decorate the boxes with mirrors, sequins and bows.

Go for Indian sweets instead of chocolates and cakes. Opt for sweets like motichur ke ladoo, kaju katli and barfis. These are enjoyed by all age groups in India. You can also gift something and accompany that with a box of sweets. Although, just a box of sweets works too.

What is the Significance Behind Giving One Rupee Coin as Shagun? 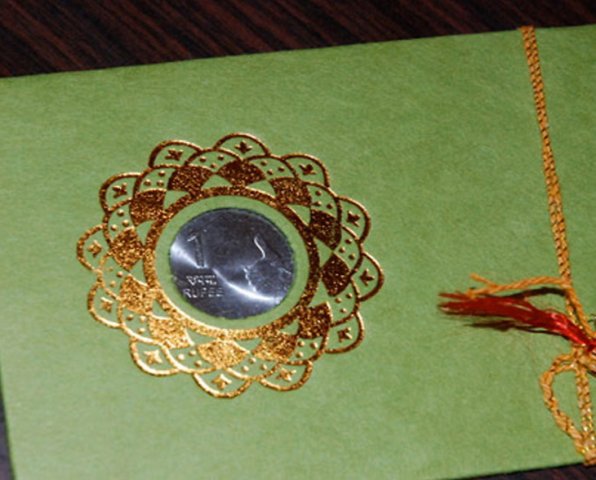 If you give cash covers, then you must have noticed that everyone advises you to add one single rupee coin with it. A lot of people believe it to be good luck. However, the major reason for the same is a psychological notion. It is believed that something new cannot start with zero.

Hence, one rupee coin is added to covers so that it can persuade the counting. So, one is considered to be the beginning of something good. Hence, people might give out covers with Rs.100 or Rs.5000, it will always have a one rupee coin in them.

Apart from that, one rupee is given out in covers during weddings and festivals. So, that one rupee is considered as a debt. Hence, it is believed that the recipient will give that the next time they meet. This is a cycle which continues to grow and hence, it is said to form a strong bond between people. In other words, it is a way of saying that we will meet again soon. 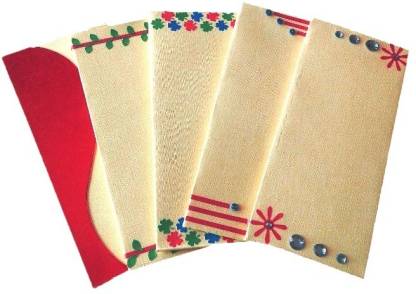 Rmantra Handmade Designer Shagun Envelopes from flipkart.com are the best shagun envelopes. They come in a pack of 5 shagun envelopes. You can use them for weddings, parties and festival gatherings. They are of A6 size.

The envelopes are made out of good quality paper but are not waterproof. They come in a combination of off-white and red. They are painted and decorated on the sides with stones and sequins. This makes them look pretty and decorative.

The envelopes look royal and classy. You can easily secure your cash and the one rupee coin in them. Apart from that, it is a good idea to gift the pack of envelopes to someone as well. They are priced for Rs.210. 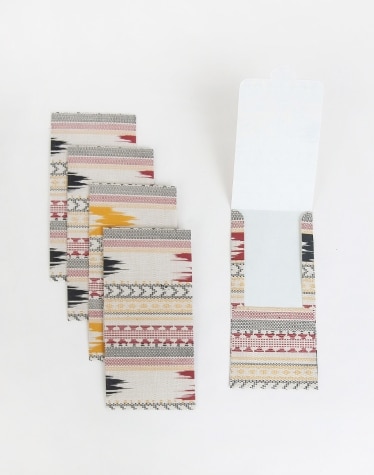 Ikat Money Envelope from fabindia.com is a great set of shagun envelopes. The best part is that the envelopes have a printed design of ikat fabric. Hence, they look really pretty and quite different. They have a hint of colours like maroon, yellow, blue and green.

The dimensions of the envelopes are 18 cm by 9 cm. The ikkat envelopes have a sophisticated feel to them and thus, you can gift them during weddings and festive gatherings as well. Each envelope is priced for Rs.180. 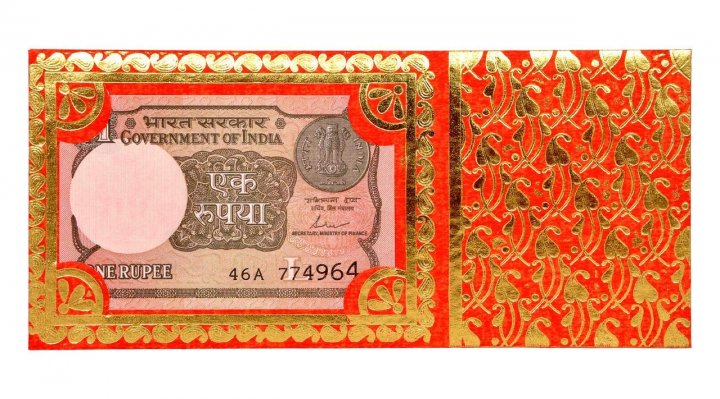 Sharda Creations Handmade Multicolor Designer Gift Envelopes from amazon.in are the perfect shagun envelopes for Diwali. They come in orange and golden colour. The golden print is very attractive and decorative. Apart from that, there are options in yellow and red colour as well.

The golden patterns are ambi designs of leaves. The envelope also comes with one rupee note. Hence, they are the perfect shagun envelopes. It is quite difficult to find a one rupee note these days and thus, this one will look nice. 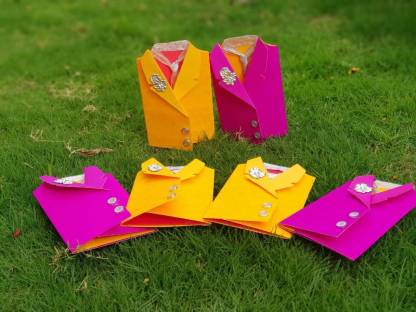 If you are looking for a unique shagun envelope, then opt for the Gifted Best Wishes Envelopes from flipkart.com. This one will work for any function like wedding, engagement, birthday, anniversary or even house warming. The envelopes come in the shape of a suit with a tie.

They look really fancy and decorative. They are available in bright colours like yellow, pink and orange. The envelopes are completely handmade and have a gummed closure. They even contain a suit pin and button in a decorative form.

The size of the envelope is 1/3 A4. The dimensions of the same are 12 inches by 7 inches. You can even put cheques in them and offer it as a gift to someone. One pack comes with 5 pieces of envelopes. It is priced for Rs.299. 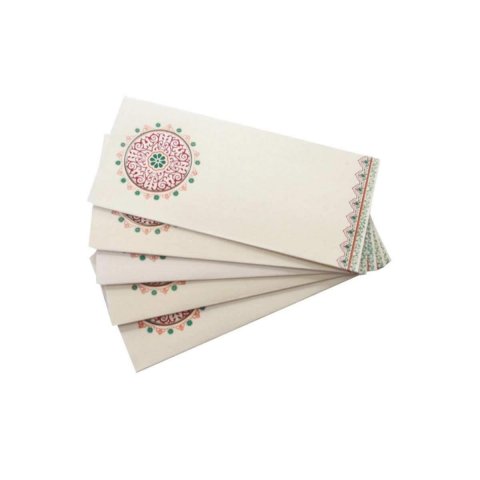 Traditional Ethnic Design Gold Paper Money Envelope Rakhi Gift Shagun Envelope from qtrove.com is one of the best shagun envelopes for weddings and functions. It is made out of handmade paper and comes in off-white colour. It has some pretty traditional designs on it.

It comes in a pack of 5. Apart from that, the envelopes contain designs in maroon, green and yellow colour. The designs are on both sides. The dimensions of the envelope are 10.16 by 20.32 cm. Each one of their pieces is made by skilled artisans.

The envelopes have a minimal and classy design. You can give them to your co-workers and relatives during Diwali or any other functions. It is a great set to gift someone who likes stationery. It is priced for Rs.400. 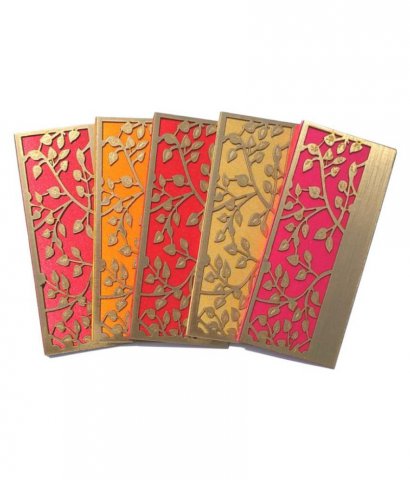 Parvenu Shagun Wooden Leaf Sarton Money Envelopes are a wonderful option of gifting shagun to your loved ones. They are available on snapdeal.com. The envelopes are decorative and fancy. It is made out of craft paper.

They come in different colours like red, pink, yellow and orange. They have a pretty design on it with leaves. The leaves are of golden colour. The envelope dimensions are of 24 by 14 by 4 cm.

The envelopes come in a pack of 5. They are so fancy that you can gift them during weddings and engagement functions. It is always a good idea to give shagun in a little decorative piece during weddings. A lot of people also give covers to their elders and important guests during their marriage. You can use these envelopes during that time as well. It is priced for Rs.499. 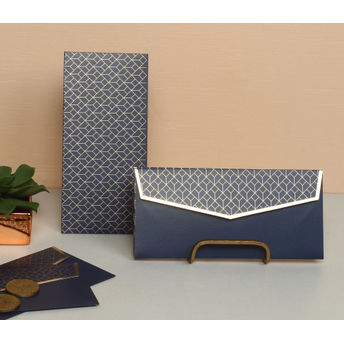 If you are looking for something classy, then you can opt for these Artsy Design Co. Indigo Geometric Money Envelopes from nykaa.com. They have a beautiful indigo colour with beautiful patterns on it. The back and the flap of the envelope is printed with geometrical patterns.

The front part of the envelope is solid in colour. The dimensions of the envelope are 3.5 by 7.5 inches. The envelopes are made out of cardstock material. They are highly durable and convenient. They also contain gold foiling which is the highlight of this product.

They come in a set of 20. The envelopes can be used to give shagun for events like wedding and baby showers of cousins and best friends. Your recipient will be able to use these envelopes again as well. It is priced for Rs.1200. 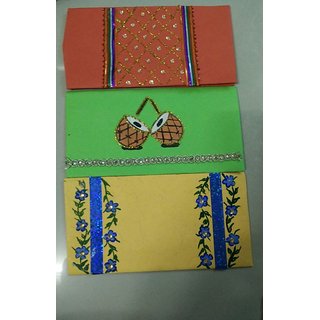 Envelopes handmade from shopclues.com is a great shagun option. They are made of thick paper with decorative designs. The envelopes come in different colours like green, yellow and orange. They all have different patterns as they are completely handmade.

All the envelopes have an ethnic look. There are traditional patterns and musical instruments on them. They contain laces and blingy tapes which makes them look appealing. One of the envelopes also has floral designs which make it perfect for birthday parties and baby showers.

These are medium-sized envelopes and hence, you will be able to secure money properly in them. It is a good idea to order them and give shagun in them as a party-favour of your event as well. It is priced for Rs.150. 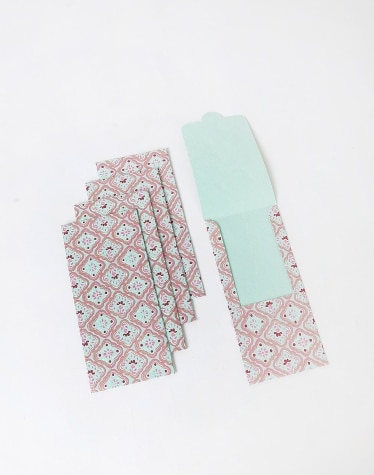 Aalekh Money Envelope Pink and Green from fabindia.com is the perfect envelope for shagun. You can give it while visiting someone during housewarming or festive gatherings as well. They are printed and look really pretty.

They are made out of handmade paper. It has some abstract patterns all over. Apart from that, the envelopes are vertical and not horizontal. This is one unique thing about these envelopes.

They also come in a pack of five. The dimensions of the envelope are 18 by 9 cm. These envelopes are breezy and minimal. You can gift them to people who like floral and summer themes. It is priced for Rs.180. 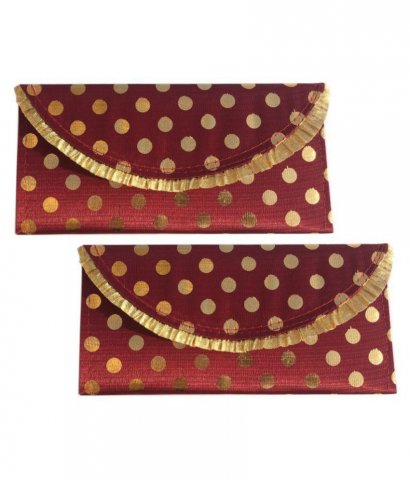 Loops n Knots Handmade Maroon Fabric Cash Shagun Envelope from snapdeal.com is the perfect choice for shagun. They are decorative as they are available in maroon colour. The fabric is printed with golden polka dots which is the highlight of this product.

The envelopes also have a golden border which makes it look decorative. They come in a set of two. You can gift these during weddings, anniversaries and festive gatherings. The dimensions of the product are 20 by 10 by 10 cm.

The unique part about this envelope is that it is made out of fabric. The recipient can secure some important cash afterwards as well. It is priced for Rs.412.

The tradition of shagun envelopes is timeless and not just during weddings. It also works as a last-minute gift and also a token of appreciation when the needs arise. Your shagun envelopes need not be the same old every year as your parents did. Jazz up your envelopes with our designs and show them your love.

You could also give away pretty shagun envelopes as your wedding favours. Watch your guests pick them with glee. If you could go expensive and pick shagun pouches, it can be used later too.