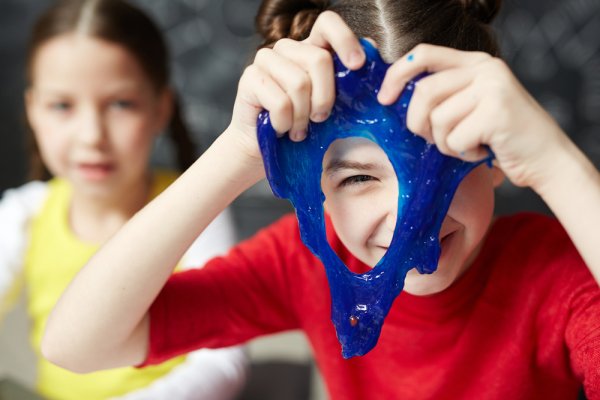 Time for Some Exciting Science Experiments: Invite the Kids for a Fun Slime Making Session! Here's How to Make Slime from Borax (2019)

Slime is a fun product to play with. Adults much like kids can also play around with it. It has been classified or also has been named a stress toy. Pressing and moulding it into different forms, like with clay is a fun and entertaining thing to do. While you can make slime from many different products, here in, Borax is the main ingredient used to make the slime, and clear steps have been elaborated on how to do it.

What's All the Hype About Slime? 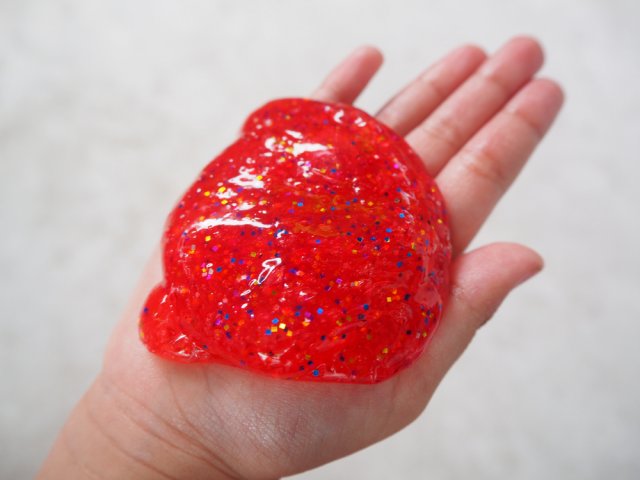 Slime was first manufactured by the Toy Giant Mattel in 1976. It feels exactly as it's name, like a slimey mess in your hands, and kids love to play with it! You can either be grossed out initially or take to it instantly, but there's something rather addictive about playing with this gooey stuff.

So what exactly is slime?
It is a non-toxic, squishy, oozy and gooey material sold in a plastic can. It was initially made from guar gum. This unique material is made by using cross-linked polymers. The typical process consisted of combining polyvinyl alcohol solutions with borate ions in a separate mixing vessel. It feels cold and slimy to touch and also has an unpleasant odor.

Slime became rapidly popular as a stress toy. After its introduction in the market of children’s toys, its popularity grew as it claimed to relieve the stress of mind and calm the nerves. By holding slime in the palm of the hand and squeezing it repeatedly, stress can disappear. It works on the simple principle of distracting the mind by giving you something else to fidget with. Doesn't that remind you of another popular toy that calms you down?

Slime’s attraction in the market grew as more and more people started using it to release pent-up emotions and tensions. Some found it very pleasurable to find it turn from a solid to a liquid and then back again. Little children love to play with slime because it feels gooey to touch and is fun to stretch. Since then, slime saw its entry into school science laboratories and became a popular science project for children because it was very easy to make. Slime is an easy experiment to explain kids about chemical reactions, polymers and viscosity. Over the past few years, the internet has been buzzing with how-to videos on making slime with different materials and color combinations.

With slime becoming a major hype and trend amongst the youth, simultaneously, many risk factors of using slime surfaced. People were concerned about how safe slime was considering its chemical components. It triggered allergies in many children and some even found other health hazards. It was proved that slime triggers allergies only in people allergic to certain compounds or chemicals; otherwise, it is quite safe to use.

It is fascinating to see how simple ingredients can turn into something totally different in just a few minutes. In this article, we shall read how to make slime from borax and also find out some important facts on slime.

Learn How to Make Slime and Fluffy Slime Using Borax

A Base Recipe for Making Slime from Borax

It is fun to make slime from borax at home. The process is simple and the materials are very easily available in the market.

How to Make Fluffy Slime from Borax? 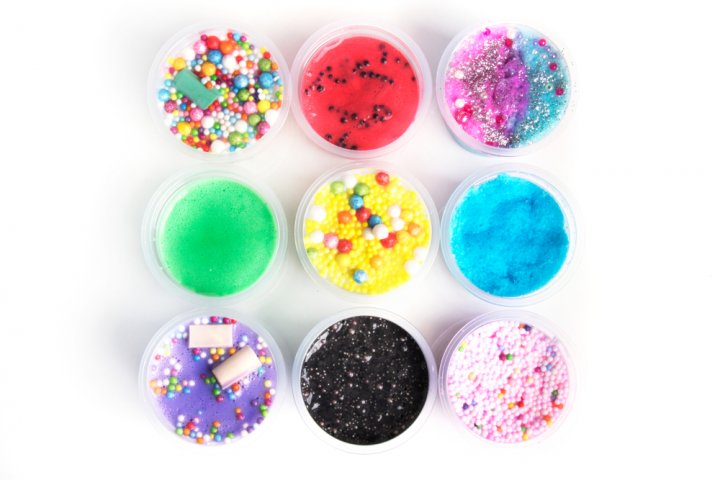 Now that you have learnt the basic ways to make slime with borax, here are some cool variations that can give your slime great color, texture, look and appeal.


1. Confetti Slime
You can add a handful of confetti and some chunky glitter to your clear glue slime (without added food coloring). Do not add too much as it will prevent the slime to stretch properly. 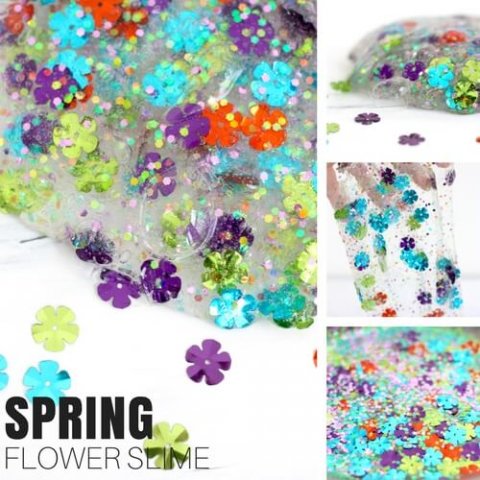 2. Soft Clay Slime
To make soft clay slime, you need to mix the slime really well with an ounce or two of soft clay. This will give your slime a new texture just like soft clay. 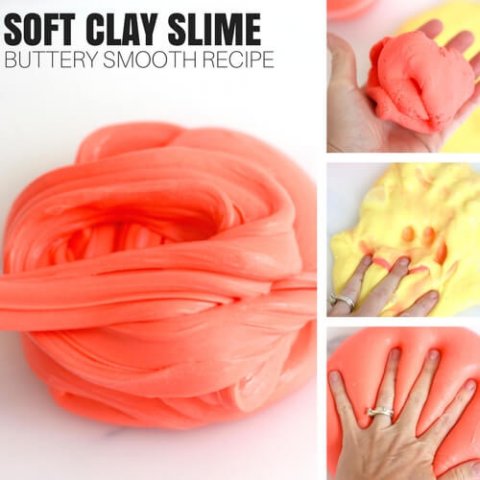 3. Crunchy Foam Slime
To make a foam slime, you can add 1 cup of mini foam beads to the glue solution. You can also make it thicker and more moldable like foam by omitting the water in the first solution and only mixing glue and foam beads before you add the borax solution. 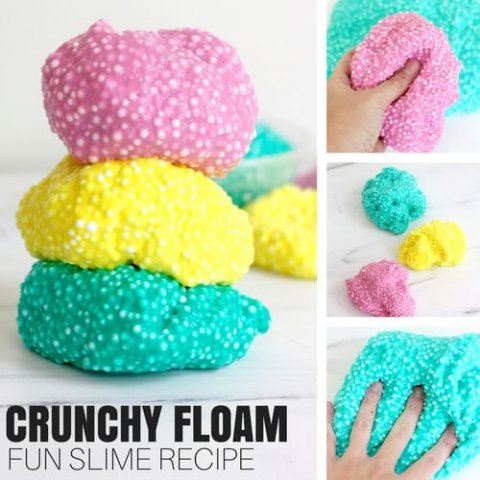 4. Fidget Slime
To make fidget slime or your own thinking putty, you need to omit the water in the first step and only add white glue with borax solution. To make the borax solution, you need to add borax powder to water just like you did when you make normal slime. If you add a little more borax powder to the solution, you might get a thicker slime. You can use this as your own thinking slime, which you can squish, punch and twist in your hand. 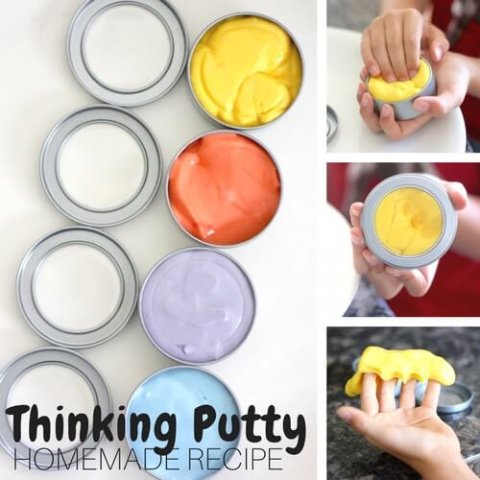 5. Swirled Slime
You can make an interesting looking swirled slime by choosing colors which look harmonious together. You can try using neon food colors to get an interesting effect 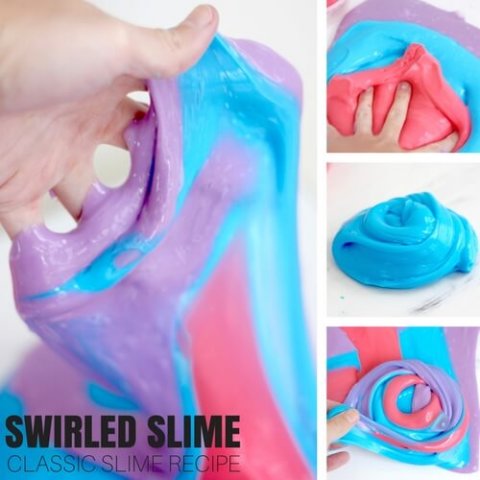 6. Lavender Calming Slime
To make a calming slime, you need to add a drop of calming lavender fragrance oil or few dried lavender flowers to the glue solution. This slime will particularly be helpful relieve sickness, stress, sleeplessness and tensions. 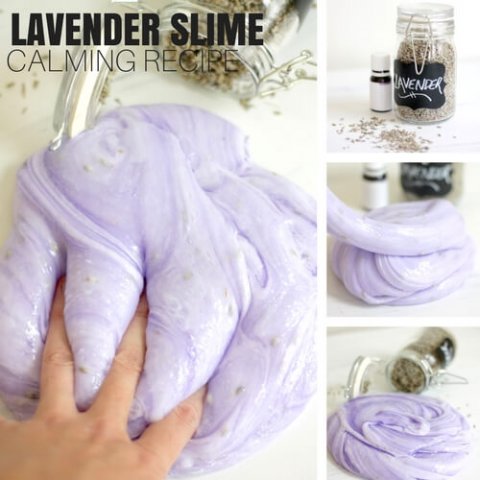 This way, adding a few ingredients to your normal slime can give you some really interesting slime variations. You can experiment with a lot of crafty items you have at home to come up with your own unique slime recipe. 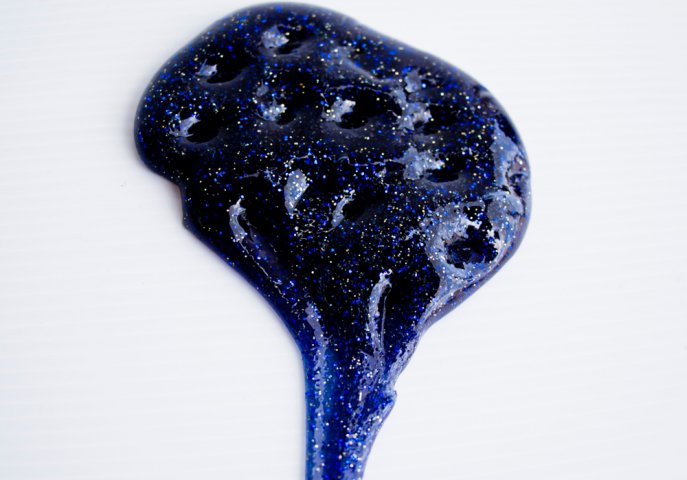 So now that you know how slime is made, here are some important facts on slime that are quite interesting.

How Does Slime Work? 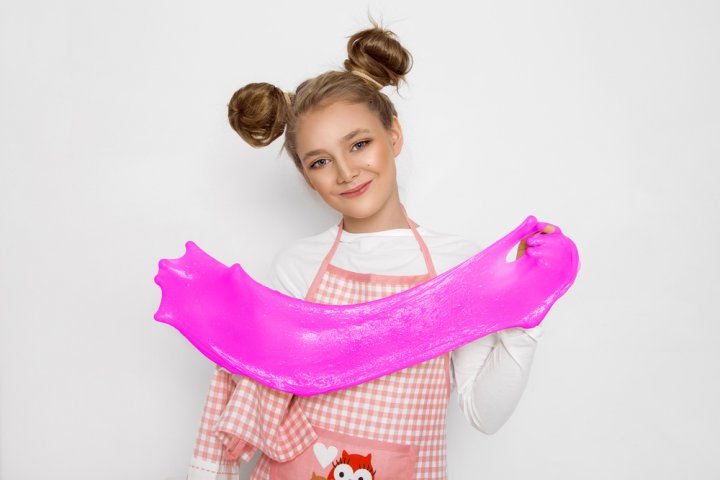 Slime is a polymer made by the cross-linking of small molecules to form different flexible chains. The space between the chains is filled with water and the resulting substance has more structure than liquid water and yet less structure than solid. It can be called a stage between solid and liquid and wouldn’t be wrong to call slime a ‘confused’ element.

When borax is added to water, it forms a solution called borate ion. This solution, when added to the second glue solution, helps the ions to make bonds between the long polymer molecules with each other so that they cannot move and flow very easily.

Slimes are a non-Newtonian fluid, which means that their ability to flow or their viscosity is not constant. It changes according to different conditions. One such example of a kind of slime is Oobleck, which is a non-Newtonian slime. It flows like a thick liquid and yet stops flowing when it is punched or squeezed. The appearance of slime can be changed by changing the properties of glue and slime. You can play with the ratio between the two ingredients to get different types of slime. Adding more borax or more glue, might make the slime more stretchy or thick.

Is Borax Safe To Use in Slime? 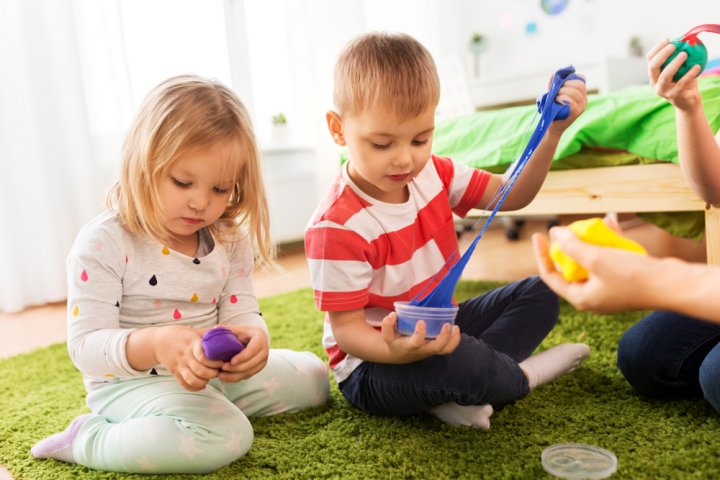 There has been a lot of hype about the safety of slime owing to the presence of borax in it. Some people get skin allergies to different ingredients depending upon their skin sensitivity. Some people are allergic to borax and a slime made with borax might trigger allergies in them.

If slime is not eaten and not given to children who might put it in their mouth, then it is pretty safe to use. Consuming slime made from saline solution and borax can make people ill. Slime is generally non-toxic when made with borax. One should avoid eye contact, ingestion and prolonged skin contact from slime.

There are some other recipes to make slime without using borax too. You can use starch powder, baking soda, laundry detergents and contact lens solutions too, but their ingredients and recipes differ. You can try out other variations if you are particularly allergic to borax.

How to Store your Slime? 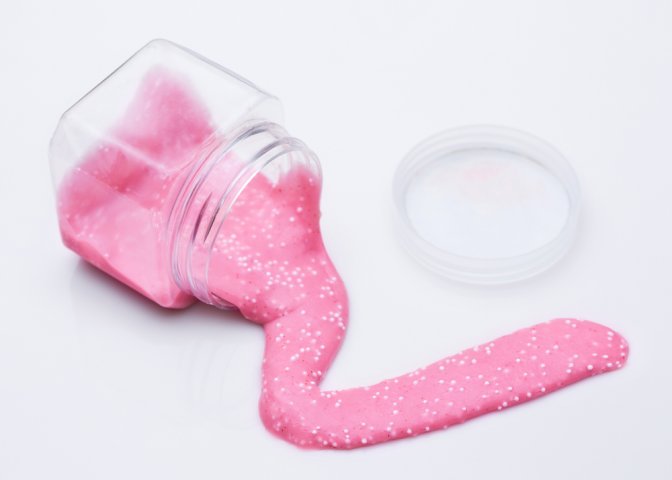 To store your slime, you need to keep it in a sealable plastic bag. It stays in best condition in a refrigerator or a in a cool place. There is no need to worry about insects swarming around your slime as borax is a natural pesticide. But chilling the slime in the refrigerator will prevent mold growth. The only problem with slime is drying as the water tends to evaporate. If sealed properly, slime does not get spoilt for a long time. Ensure that you don’t leave your colored slime on surfaces that can get stained by food coloring. Slime residue can be cleaned by soapy water.

Things to Do with Slime 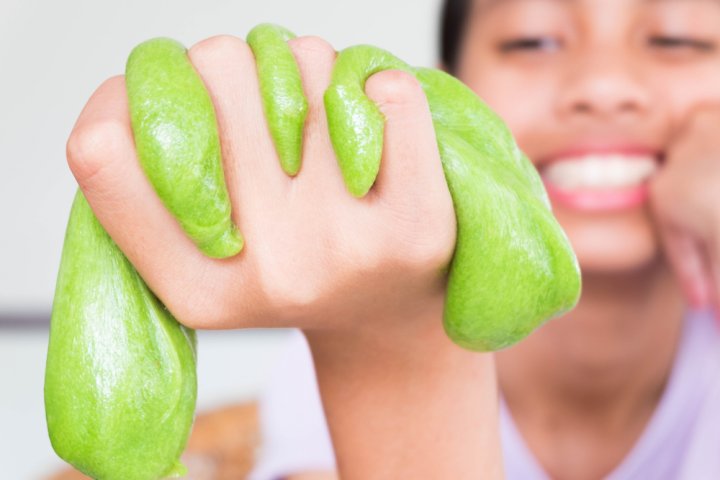 Slime can be used as a stress toy because of its high level of flexibility. You can enjoy stretching it and watching it flow. The more you work on it, the stiffer it will get and eventually become like wall putty. It can be shaped and molded just like clay, but the only difference is that it will lose its shape soon.

The Best Substitute for Borax in Slime 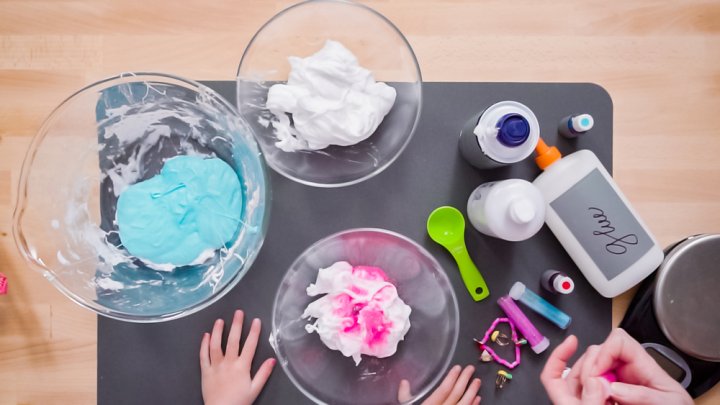 Many people are skeptical about letting their kids coat their hands with borax powder. In that case, there are some good alternatives you can use:

Having Fun With Borax and With Making Slime

Borax is a chemical compound that turns into slime when mixed with the right ingredients. Mostly Borax is inform of powder or a solution, and the result after properly mixing it with some ingredients, that is the slime, is a fun thing to play with. It is semi-liquid and semi-solid, and thus can be easily molded much like clay, into many different forms. With extensive steps described, on how to make slime from Borax, one needs to also be careful with how they store it as well as handle it around infants or small kids. Moreover, there are also some other products that can be used as substitutes of Borax to make slime. They have been clearly listed above. Go ahead and have fun playing with slime.