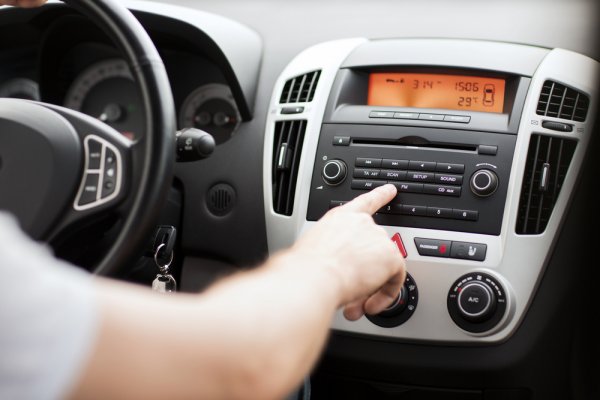 Wondering Which Music System is Best for Your Car? Here's a List of the Top Car Audio Systems Which Deliver a Mind Blowing AV Experience! (2020)

Car audio systems have evolved dramatically over the years. From being simple audio devices they are now a comprehensive multimedia navigation system which deliver a complete mix of audio, video and data content, with seamless connectivity to your smart phone. If you are looking for a good audio system for your car, we have compiled this list just for you.

Few Important Facts about a Music System for Car 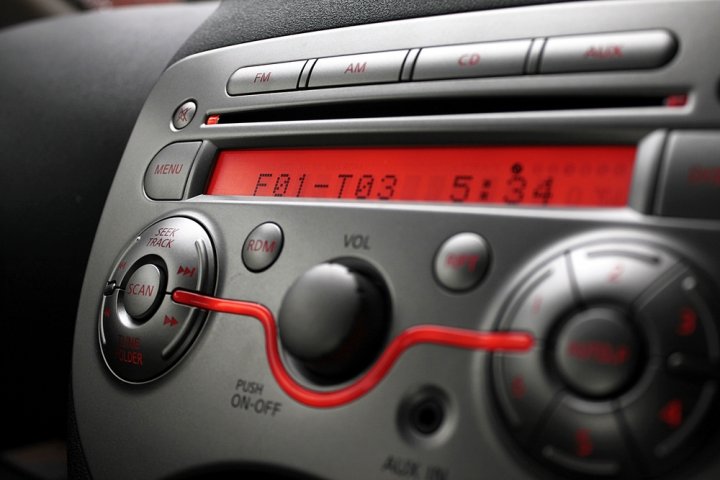 With long commutes, most of us are eager to have the best music system in our cars! Nowadays, music systems in cars are not only used for listening to music, but for taking calls, navigation, online help, video player and front and rear view camera output, etc. However, till the 1950s a simple AM radio was ‘The Music System’ in a car, subsequently FM radio was introduced in 1952, then came the eight track tape players followed by cassette players, then CD players in 1984, DVD players in the 21st century and then; the Blue-ray players, Bluetooth phone integration and the latest Android Auto features were introduced in the last decade. Once it was all manual and there were separate hard buttons for different controls, but now music systems in cars have touch screens, steering wheel controls and voice command controls as well.

Initially what was meant for listening to music and radio is now used for telecommunication, telematics, security of the vehicle (both inside and outside), remote diagnostics system and with the help of active noise control, the loudspeakers of the music system can also minimise road and engine noise. Before you decide to purchase a music system for your car, you need to have a fair idea about the features you need in your in car music system and your total budget.

Breathtaking, Luxurious, Exotic: Know All About the 10 Best Cars in the World!
Back to top

Different Components of a Music System for Car 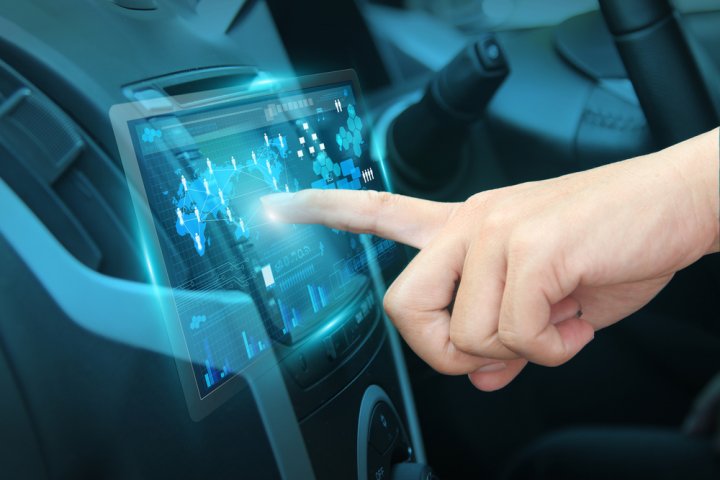 Remember those ugly looking music systems where you could listen to a few radio channels and you had to fit in, rewind, forward and eject out the cassettes multiple times to get the right song playing? Though those systems are a thing of the past now, but the basic components still remain the same. The three major components of a music system for a car are - the head unit, amplifiers and speakers. Let’s check out a few more details about all the three components:


A right mix of the stereo, amplifier and speakers can provide you an amazing experience and the best music system for your car. 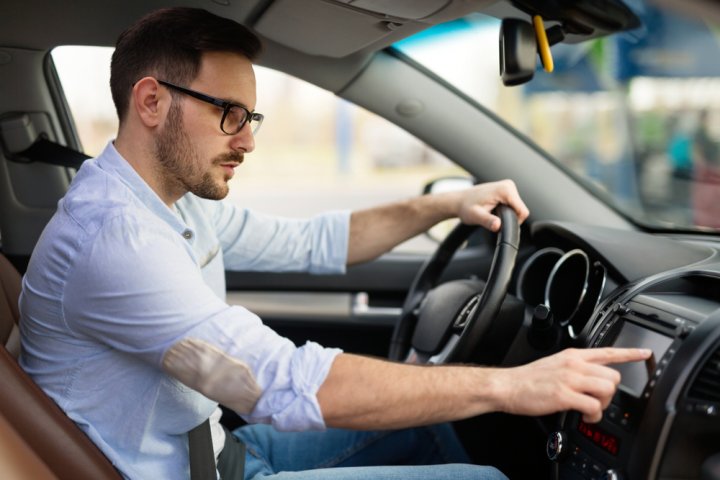 In this category, we have picked the most popular and economical music systems (main units). You can check them according to your budget, requirements, multimedia connectivity and the right size which would fit into your vehicle.

In a World of Cramped Seats and Incessant Delays, These 10 Best Airlines in the World are the Airlines Worth Flying(2019). 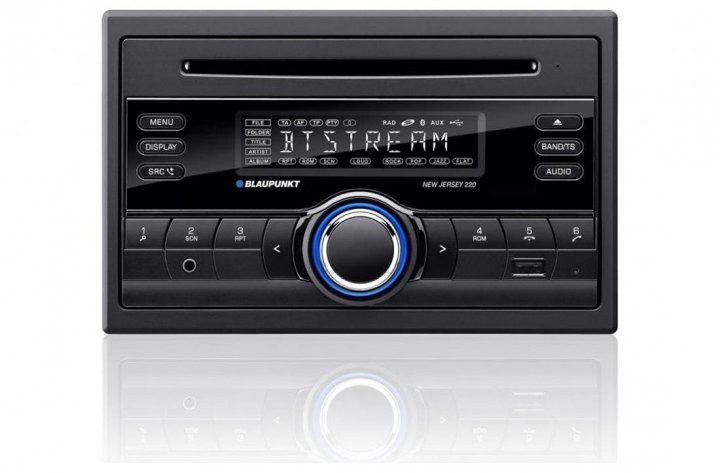 The New Jersey 220 BT model by Blaupunkt is an easy to install double DIN size (4 inch x 8 inch) Bluetooth enabled audio system with a 3 band parametric equaliser which provides high quality sound and is capable of playing music from multiple sources like FM, USB and Bluetooth to provide you a pleasant experience. There is no touch screen or video display available in this car audio system and it is available on Paytm Mall for Rs. 8,999.00. 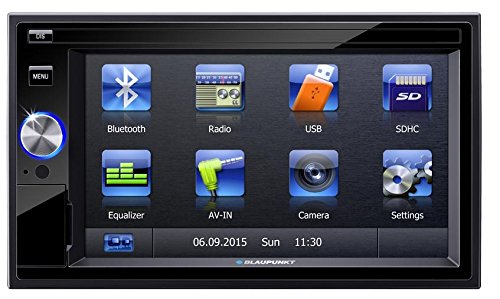 Wondering Which Music App is the Best in India? We Found 10! Now Enjoy Your Favorite Music Wherever You are with the Best Music Streaming Apps in 2020 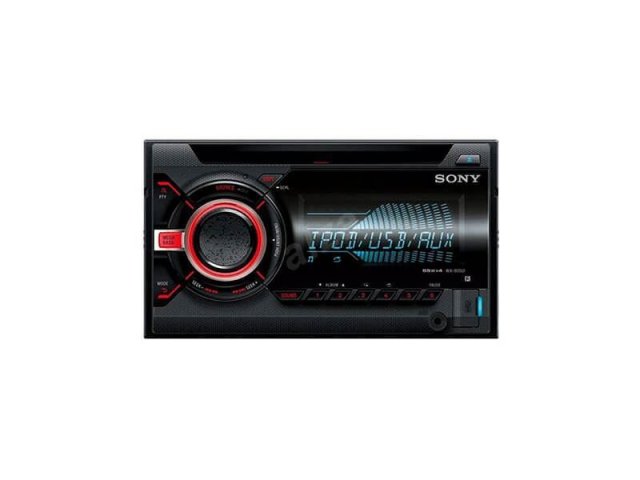 The double DIN black colour car stereo by Sony looks very stylish and compact. Various options like USB, AUX, iPod and Bluetooth are provided to let you play uninterrupted music. The Dynamic Soundstage Organiser (DSO) feature gives the perfect sound ambience with virtual speakers. The mega-bass characteristic adds quality to the overall sound experience and variable illuminations are provided to match your mood and the colour of the car’s interior. The Sony WX-800UI Car Stereo is available on AutoFurnish for Rs. 8,539.00.

If you are an Apple user, then Sony XAV-AX1000 (6.2-inch) Media Receiver can be the right multimedia system for your car, as it supports Apple Car Play and you can communicate with Siri to get correct information on real time directions. The 6.2 inch touch screen is very responsive and wakes right after you turn on the ignition. The DSO feature adjusts the signals of the different speakers, tweeters and sub-woofers, etc. to improve the stereo positioning and the sound feels like coming straight from the dashboard. The 4 x 55 W Dynamic Reality Amp 2 advanced signal processing removes interference, thus providing clear sound even at high volume. With three outputs, you can add extra amplifiers and sub-woofers to the system and the output power of 55 W can be attached with a rear view camera. This iPhone compatible Sony audio system for your car is available for Rs. 12,362.00 on Amazon. 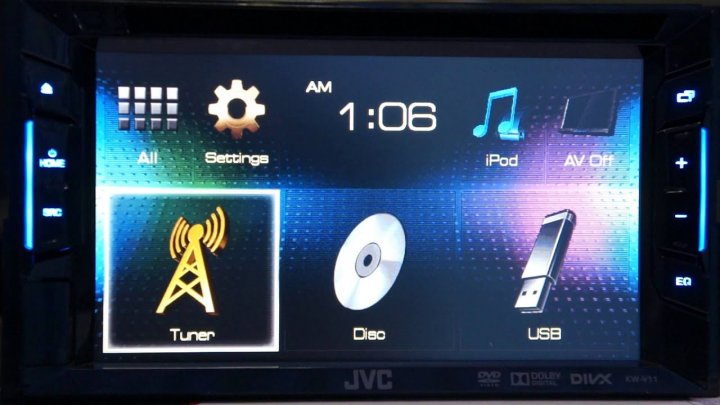 A powerful car stereo by JVC, with a maximum output of up to 50 W is compatible with iPhones, iPods and Android phones. Also, it supports DVD-R/RW and CD-R/RW apart from the usual USB and AUX inputs. The media system is equipped with crossfade and balance control, built-in equaliser (normal, rock and pop) and supports MP3, WAV and APE audio formats. The 6.2 inches touch screen supports MPEG-1 and JPEG video formats and the system has features like steering wheel controls and a built-in microphone. The double DIN system from JVC comes with a remote and is available on Flipkart for Rs. 6,499.00. 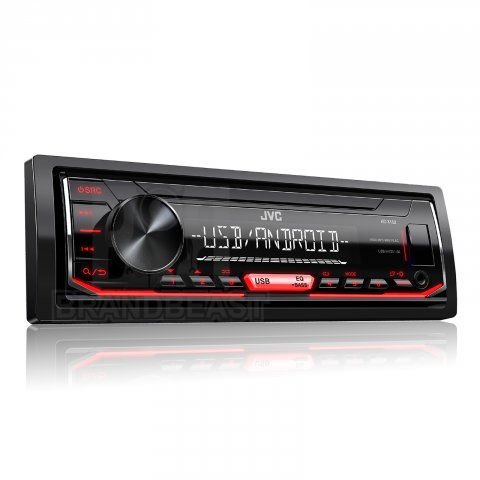 A powerful car stereo by JVC, with a maximum output of up to 50 W is compatible with iPhones, iPods and Android phones. It also supports DVD-R/RW and CD-R/RW apart from the usual USB and AUX inputs. The media system is equipped with crossfade and balance control, built-in equaliser (normal, rock and pop) and supports MP3, WAV and APE audio formats. The single DIN system by JVC comes with a remote and is available on Flipkart for Rs. 2,811.00. 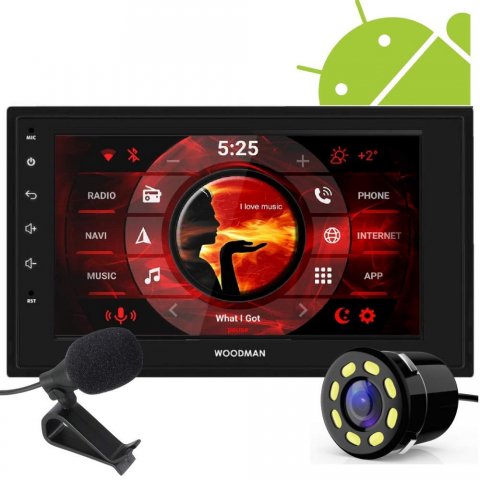 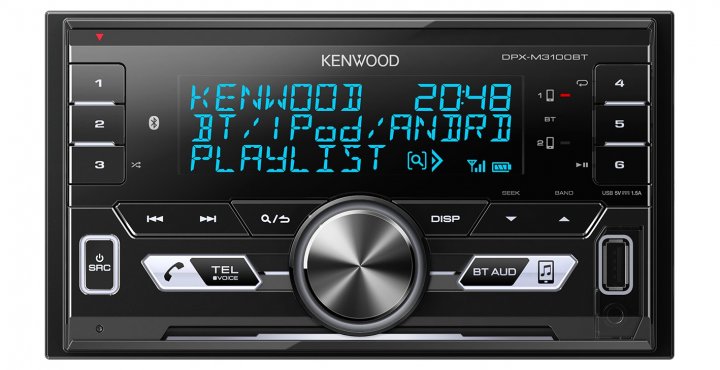 One of the best rated products of Kenwood, the DPX-M3100BT Digital Media Receiver comes with ‘2 phones’ hands free calling option and the Wideband Speech Hands-free Profile 1.6 provides better quality reception while taking calls. You can control Spotify from your iPhone or Android phones and listen to unlimited number of songs. The Kenwood Music Mix lets you connect up to 5 Bluetooth devices at the same time and audio streaming can be enjoyed by switching the devices just at the touch of the screen. Bright adjustable LED lighting to match your mood and interiors is available on this media receiver, which is available for Rs. 7,499.00 on Amazon.

Still Dealing with the Tangled Mess of Wired Earphones? Ditch Them for One of These 10 Best Bluetooth Earphones with Mic (2019)
Back to top

Best Speakers for Your Car 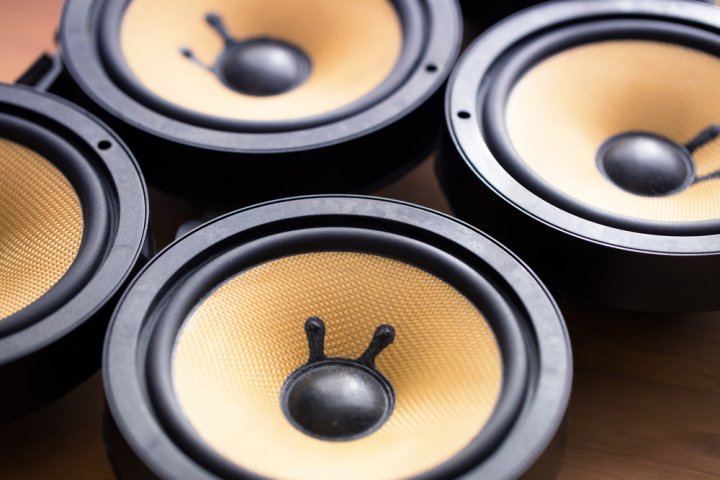 Choosing the right speaker is equally important to have a complete and enthralling experience of your car audio system. Let’s check out a few of the bestselling and popular speakers for the music system of your car.

These easy to install coaxial speakers from Sony are 6 x 9 inches in size and have a mica matrix cone woofer which offers strong and deep bass sounds. The super tweeter enhances the high frequency music and the 420 W speakers can produce a sound of up to 90 decibels. The pair of car speakers is made of polypropylene in tray panel shape and can be purchased from Flipkart for Rs. 2,315.00.

Boost Your Run's High with Powerful Music: Our Pick of the 10 Best Bluetooth Headphone for Every Type of Runner, on Every Budget (2019) 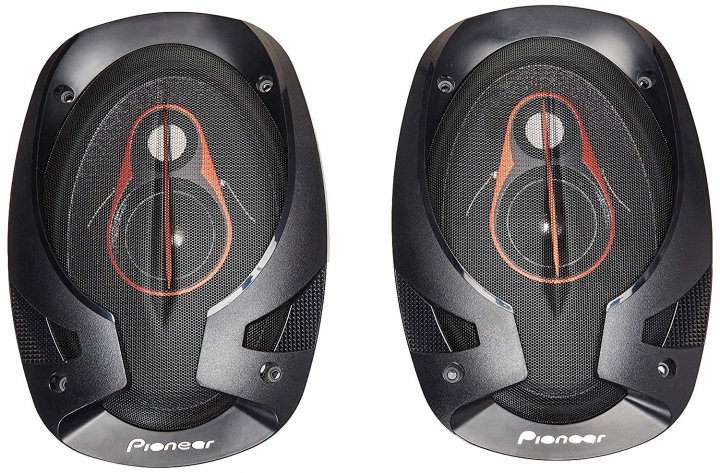 One more coaxial speaker which is a 3-way oval shaped speaker set with dimensions of 6 x 9 inches and has nominal power of 50 watts and peak of 400 watts. The set contains 2 woofers, 2 woofer grills and 2 speaker wires along with a 1 year warranty card. The lightweight speaker set for car by Pioneer can be purchased from Amazon for Rs. 2,132.00.

Tired of Tangled Wires? Upgrade your Music Listening Experience with the Best Bluetooth Earphones in India 2019 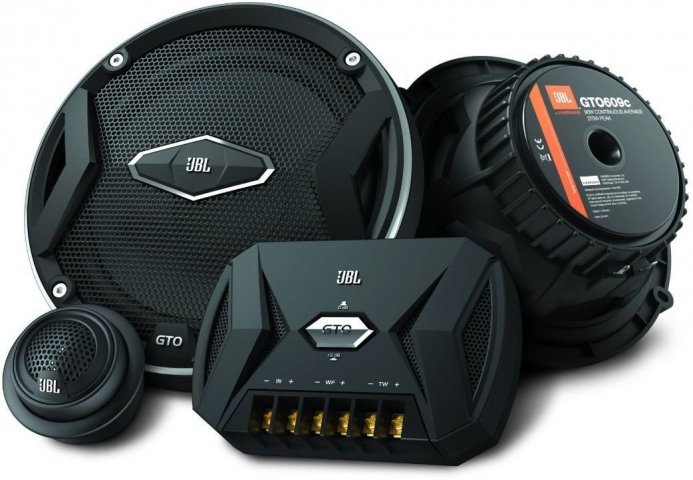 A component speaker system to produce high quality sound and crisp details of different frequencies by JBL is the GTO609C High-Fidelity Component Speaker System. It has a normal power output of 75 W and peak power output of 270 W and has a 2-way speaker system (360 W), 2 grills, 2 crossovers and 2 tweeters to give you a wonderful music experience in your vehicle. It has gold-plated terminals and the speakers are made of titanium laminate which helps them to produce sounds of up to 93 decibels. This component speaker system for car by JBL can be purchased from Amazon for Rs. 5,890.00.

It is important for you to invest in a good quality car audio/music system after doing meticulous market research. This is because a good and versatile system will help you keep calm and relaxed while driving in a traffic-congested city or during long drives on the highway. It is during these times that you will truly appreciate the value of your car audio system. Stay engaged with us for more such meaningful content which impacts your daily life.