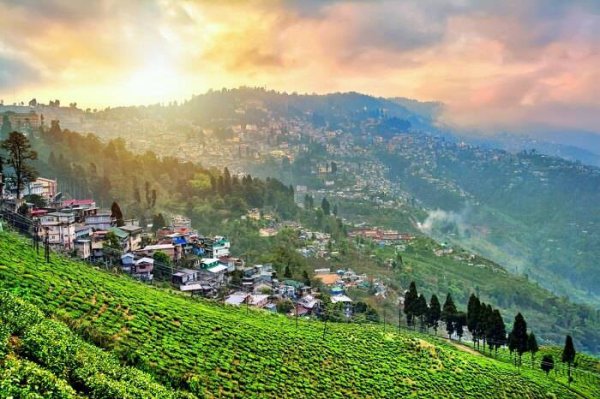 Darjeeling in West Bengal is one of those that everyone must visit at least once. The charming hill station has something to offer every kind of traveler, and is as suitable for families as it is for the solo traveler. It includes pretty scenic places, a zoo, monasteries, places to eat, and beautiful view points. Read on to find out more!

Darjeeling: The Queen of the Hills 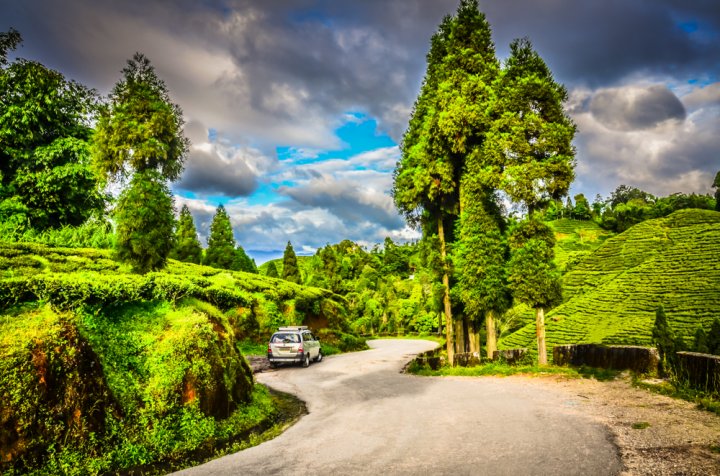 Popularly known as the 'Queen of Hills; and the 'Mecca of Tea', Darjeeling in West Bengal is one of the most sought after hill stations in India. From magnificent snow-capped mountains, dense forests with ferns, firs, and pine trees, to beautifully manicured tea gardens, joyful toy train rides, and delectable food – Darjeeling has it all. So, if mountains are calling you and you are ready to go, book your tickets for Darjeeling. We are sure that you will not be disappointed and will come back with a lot of happy memories. And to help you make the most of your time in Darjeeling, here is all that you need to know. 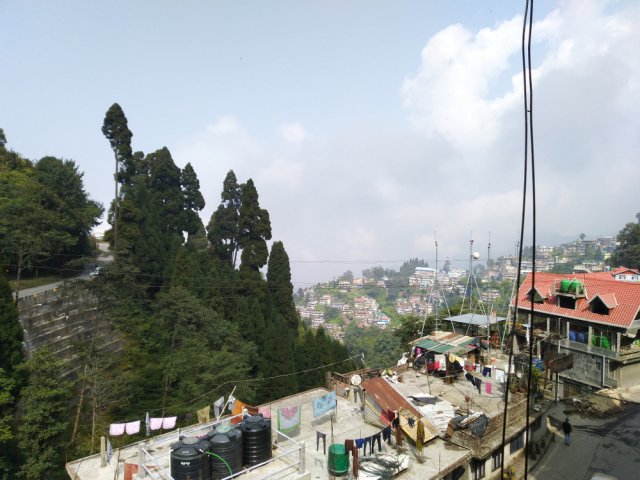 April - June: These are the summer months in West Bengal and thanks to the summer holidays, most tourists visit Darjeeling during this time to spend a relaxing holiday, away from the heat. The weather in Darjeeling during these months is quite pleasant. There is no rain and the days are sunny and bright, while the evenings are pleasant with a chill in the air.

July to September: These months mark the onset of monsoons and hence Darjeeling is blessed with heavy rains. This is not the best time to be in Darjeeling since landslides and other roadblocks might cause hindrance. However, September is a good month to visit Darjeeling since the rains are almost gone and the forests are green and the rivers and waterfalls are all full and mighty.

October to March: These are the coldest months since October marks the beginning of winters and the chill remains till February, at least. So, if you love winters and want to catch a clear view of the Kanchenjunga, this is the best time to visit Darjeeling. 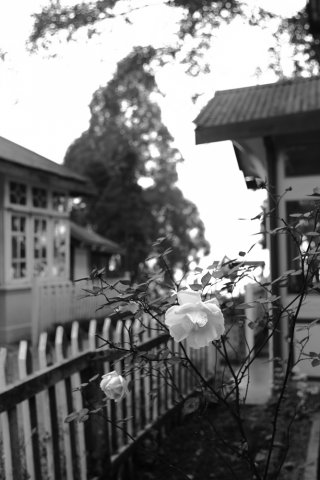 As a popular destination, there are numerous hotels in Darjeeling. So, accommodation is never a problem. However, if you wish to stay in a place that offers a great view of the snow-capped Kanchenjunga right from your room’s window or balcony, or a hotel that allows you to soak in the sun and stare at the starlit sky at night, here are a few options that you can try to book while visiting Darjeeling.

1. Windamere Hotel
Observatory Hill, Chauk Bazaar, Darjeeling, West Bengal 734101
One of the oldest properties in Darjeeling, Windamere Hotel reflects the old-world colonial charm. Situated on a hilltop, Windamere Hotel has vintage-style rooms that are named after historical figures who have once stayed in them. There are both colonial suites and cottages that offer either garden view or mountain view. Considered one of the last colonial homes in the country, Windamere offers complimentary meals and also has all the modern amenities that a tourist may seek during his/her stay.

3. The Hermitage
Hermitage Resort Mall Road, Darjeeling, West Bengal
One of the prettiest hotels in Darjeeling with an awesome view of the mighty Kanchenjunga, the Hermitage has 20 polished rooms. The most impressive part of this elegant hotel is the open terrace that offers a wonderful view of the snow-covered peaks. It is also the perfect place to sit and enjoy a cup of hot Darjeeling tea. So, if budget is not a constraint, book this amazing hotel that offers standard amenities, beautiful rooms, good food at the multicuisine restaurant, and is situated at a location that is just unmatched. 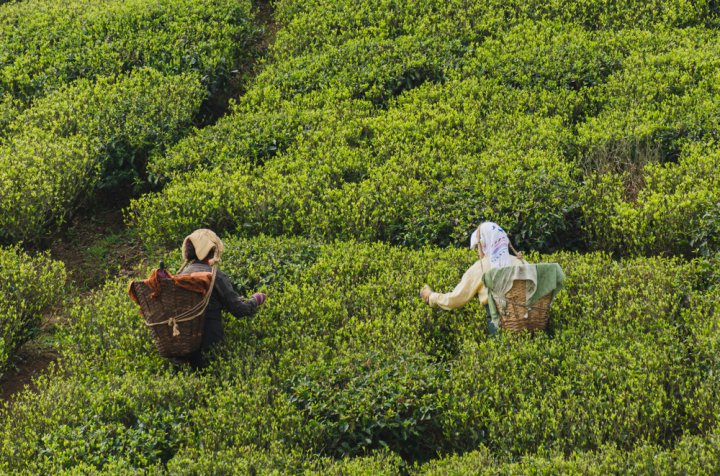 The stunning town of Darjeeling has a lot of things to offer to its visitors. Whether you are a mountain lover, an adventure enthusiast, a nature admirer, or a simple tourist – there is something or the other that you can do in Darjeeling.

10 Must Visit Places in Darjeeling 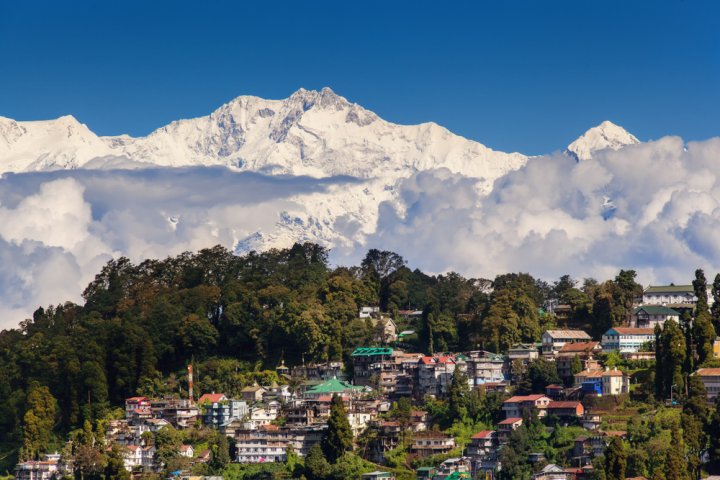 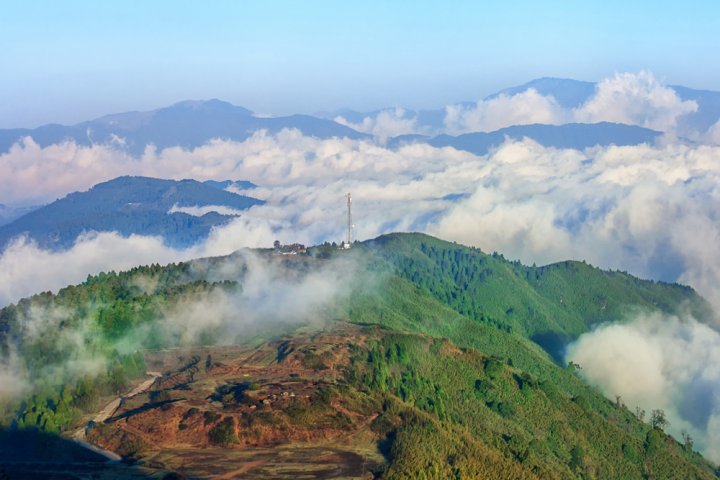 A trip to Darjeeling can never be complete until you visit Tiger Hill. This lovely tourist spot is just perfect to enjoy the splendid view of the beautiful Kanchenjunga at the break of dawn. Tiger Hill is situated at an altitude of 2590 meters (8497.375 feet) and one can always find tourists waiting in queue to watch the snow-clad Kanchenjunga get beautifully illuminated by the first rays at dawn. The beautiful hill, the smell of the fresh and crisp air, the floating white clouds, and the view of the rising sun is what will leave you with an experience that will fill your heart with joy and memories that you will cherish for a lifetime. 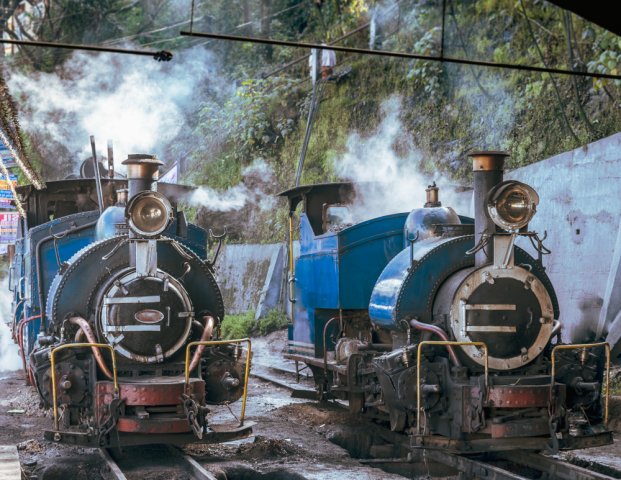 Now a World Heritage Site (declared by UNESCO in 1999), the Darjeeling Himalayan Railway or the DHR was constructed sometime between 1879 and 1881. The DHR is 88 kilometers long narrow gauge line and runs between New Jalpaiguri and Darjeeling. Considered 'the most outstanding example of a hill passenger railway' by UNESCO, the DHR’s toy train ride is one of the best ways to witness the natural beauty of Darjeeling. Chugging its way through the narrow turns and bends in the mountains, you pass through small villages, tea plantations, and forests. Breathe in the fresh air, wave to the little children that you pass by, and soak in the beauty of Darjeeling through this joy ride. 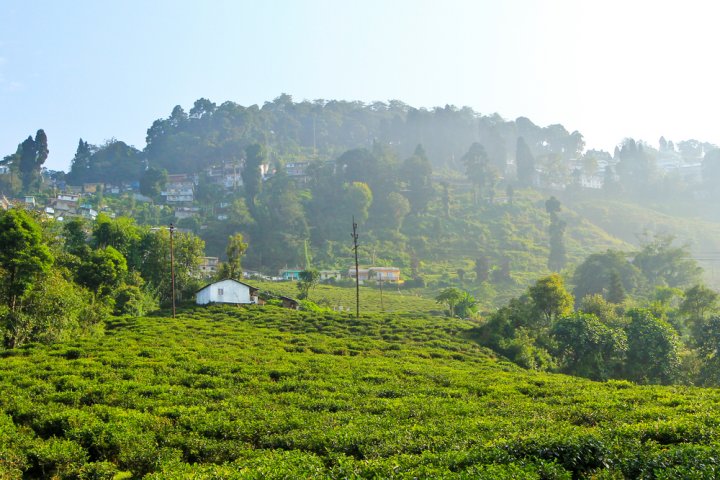 Spread over 437 acres of land at 6800 feet above sea level lies the Happy Valley Tea Estate, the second oldest tea estate in Darjeeling. One of the oldest and one of the world’s highest tea factories, the Happy Valley Tea Estate produces some of the finest hand-rolled tea in India. Visit the estate to take a walk around the vast tea gardens, catch a glimpse of the Eastern Himalayas, learn more about tea making, taste some of the finest teas, and bring home some too. However, do keep in mind that the estate is open to visitors from Monday to Saturday from 8 am to 4 pm. We are all aware of the fact that Darjeeling is synonymous with tea. Besides the splendid views of the Kanchenjunga, what makes Darjeeling stand out is its lovely and vast tea plantations. So, if you are looking for a fantastic place to sip on some tea to refresh yourself, head over to Margaret’s Deck in Kurseong, a hanging old-fashioned tea lounge by Goodricke Tea Company. A lovely lounge with an open verandah that offers a nice view, Margaret’s Deck is famous for selling different varieties of tea and is a good option if you are looking for an authentic place to buy tea. You can also taste some of the snacks like scones, sausages, cakes, etc. along with the tea, and if you are visiting during lunchtime, Margaret’s Deck also serves delicious lunch. 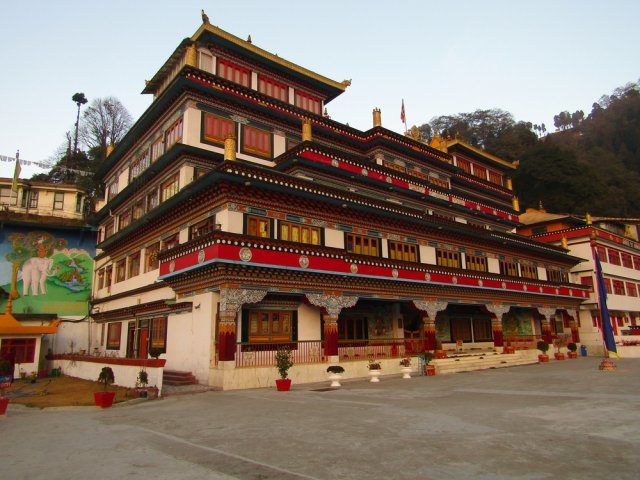 Ghoom Monastery, also known as Yiga Choeling, is one of the prettiest monasteries in Darjeeling. Built in the year 1850, it is one of the oldest Tibetan Buddhist monasteries in Darjeeling. The prime attraction of this old monastery is the 15-foot model of the Lord Buddha, which is known as the Gyalwa Shampa or the Maitreya Buddha. This huge statue was made with clay that was brought from Tibet back then. Today, one can find two huge oil lamps in front of the statue that is kept lit 24x7 throughout the year. However, do not confuse the old Ghoom Monastery with the Samten Choling Monastery, also referred to as the Ghoom Monastery by some localities and drivers. 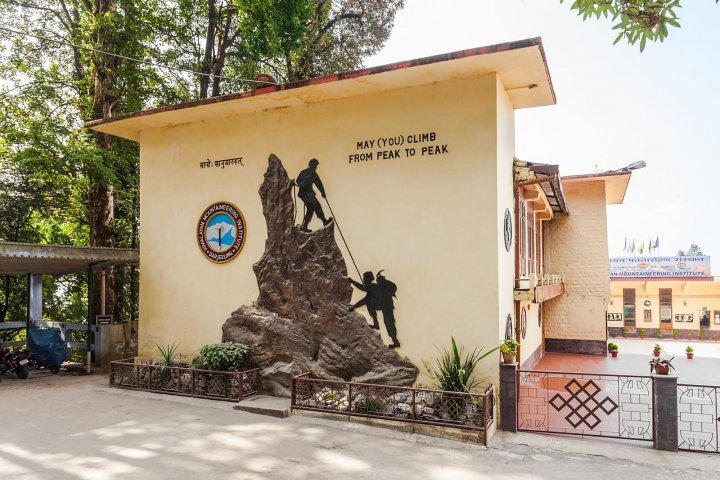 Located at Jawahar Parvat, the Himalayan Mountaineering Institute conducts several mountaineering and adventure courses for both beginners and experts. So, this is the perfect place to visit for adventure enthusiasts. The course duration at HMI ranges from a few days to months. The activities range from rock climbing, camping, trekking, to advanced courses that include mountaineering courses. The HMI also houses the HMI museum which is a storehouse of information regarding mountain climbing, the Himalayas, its flora, and fauna. Also on display are personal gear and clothing of Tenzing Norgay. Do visit this interesting place when in town. You will not be disappointed! 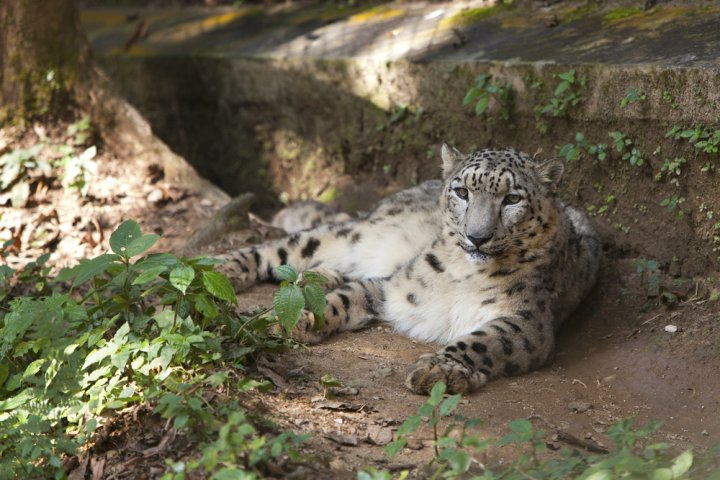 Also known as the Darjeeling Zoo, the Padmaja Naidu Himalayan Zoological Park is a very rare zoo in India. Located at 7000 feet above sea-level, the Darjeeling Zoo is the largest high altitude zoo in India. It is home to some rare species of animals and birds that are hardly seen anywhere else in India such as the Blue Sheep, Yak, Asiatic Black Bear, Royal Bengal Tiger, Blue Macaw, Himalayan Monal, Lady Amherst, Temminck's Tragopan, Siberian Wolf, Himalayan Tahr, Red Jungle Fowl, Pheasant, Siberian tiger, etc. What makes the zoo remarkable is that it has successfully completed captive breeding programs for animals such as the Red Panda, the Himalayan Wolf, and even the Snow Leopard. The zoo was also awarded the prestigious award of "The Earth Heroes" among 300 zoos all over the world in 2014. 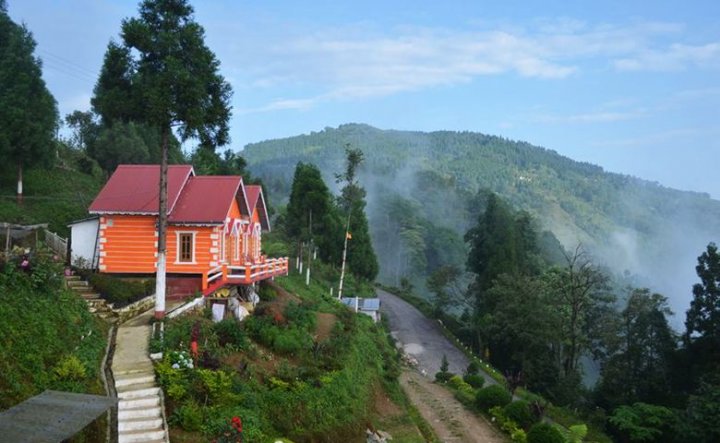 If you have had your fair share of fun in Darjeeling and want to spend some quiet time in a quaint little picturesque place, head over to Tinchuley. Literally meaning three ovens, the village is surrounded by three mountain tops that look like ovens (the reason for the name). Tinchuley offers lovely views of the Eastern Himalayan range. One can also watch the Teesta river flowing through the mountains, enjoy views of orange orchards and tea gardens. Breathe in the fresh air as you walk along village trails and stop at certain points for bird watching. It is also the best place to be if you wish to experience local customs, culture, and taste some homemade local food. This is one of the main tourist attractions in Darjeeling. Located at West point atop the Charlemont Hill, the Peace Pagoda in Darjeeling is one of the 30 pagodas that were built in the world by the Japanese Buddhist monk Nichidatsu Fujii. The pagoda was built to promote World Peace and harmony and one can feel a sense of inner peace the moment one steps inside. To enjoy a serene experience, visit the Peace Pagoda during your trip to Darjeeling. 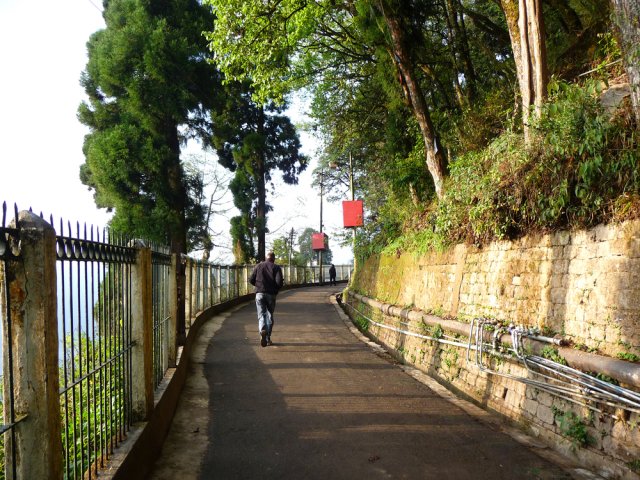 The Mall or Chowrasta is the hub and primary attraction of Darjeeling. Located on top of Nehru Road, the Mall is the best place to shop for souvenirs, clothes, and other accessories. It is also lined with numerous restaurants and eateries. And not just that, you will also enjoy taking an evening stroll at Mall road – with the cool wind brushing your face and wiping away all the tiredness of the day.

Go off on a Scenic Trek 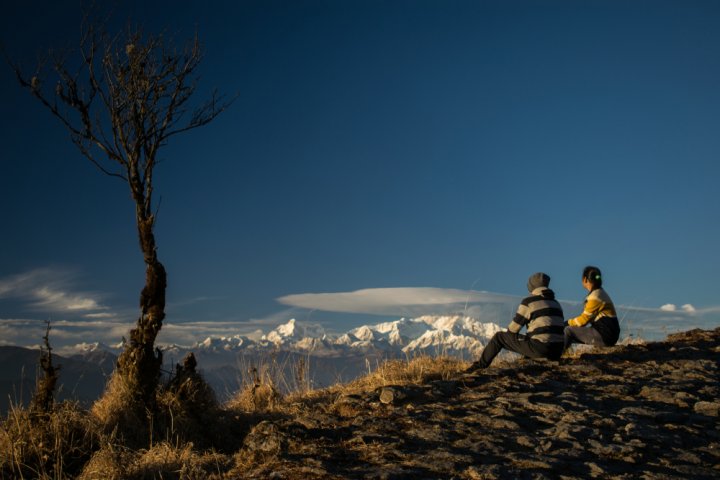 There are many scenic trekking points in Darjeeling. For example, the Sandakphu and Singalila trek, Phalut trek, etc. There are many tours and travels companies that arrange for such treks. So, if you are up for some fun and adventure, and wish to witness the virgin beauty of the mountains, its flora, and fauna, sign up for one.

Darjeeling, The Queen of Hills

The North of Bengal houses this pretty little place called Darjeeling which offers you amazing tea, beautiful views of the mountains, and memories that will last you a lifetime. Make sure to visit this place whenever you're touring Bengal for a memorable experience. It is a hilly area, so pack accordingly and make sure to visit the place during non-monsoon months for the best experience.