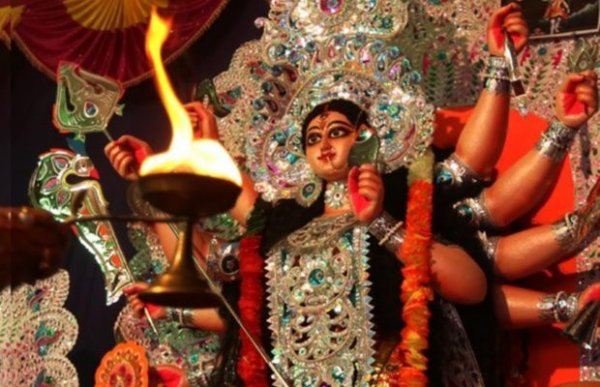 Navratri is a special time to celebrate the Godess in all her forms. The Aarti is a major ritual during these days, so we have elaborated on the different kinds of decoration ideas that you can try during Navratri celebrations. From Matkas to Torans, we have everything you'll need right here. Read on to find out more!

Why is the Navratri Aarti Special? 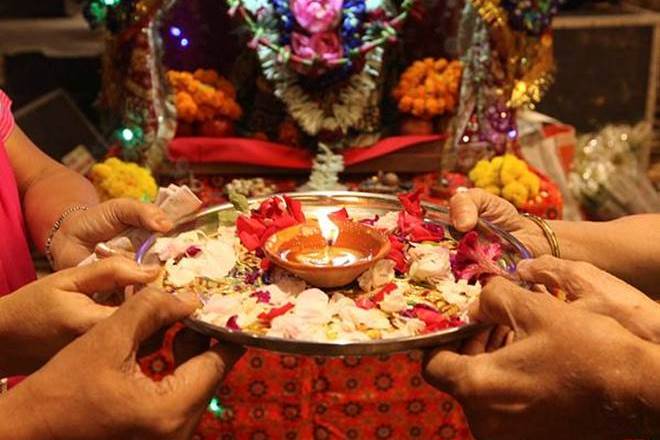 Source financialexpress.com I The significance of Navratri Aarti

The colourful Navratri festival is spread over 10 days and 9 nights. It is one of the most sacred festivals celebrated with great pomp and show in Gujarat, Maharashtra, Jammu and West Bengal, along with other states in India. The Hindus worship Goddess Durga or Shakti, who resonates with the energy of the Universe.

Goddess Durga has 9 beautiful forms and all her forms are worshipped during the nine days of Navratri. People show great enthusiasm and zeal in conducting the holy rituals and ceremonies along with dancing away in the nights.

Why Aartis Are Special?

While Gujarati folk dances like garba and dandiya dominate the major craze behind the festival, the Navratri aarti is also quite significant. To make their aartis special, Hindus put in great efforts to decorate their Pooja rooms with colourful rangolis, decorated matkis, beautiful clothes for the idol of Goddess Durga, diyas and aarti thalis. The entire house gathers to sing praises and seek blessings of the deity by performing the aarti. The Navratri aarti is conducted in the mornings and evenings with an aarti thali.

People dress up in fresh and new clothes before offering their prayers. The aarti songs and bhajans are very melodious and mostly in Sanskrit. There is a whole new aura spread in the house when aarti is being performed.

Being an Indian, It’s Like a Treat for Us Celebrating Any Festival((2019): Try These Great Garba Decoration Idea for This Navratri and Rejoice the Nine Nights!
Back to top

Vivid Decorations to Make Your Aarti Resonate with an Aesthetic Appeal 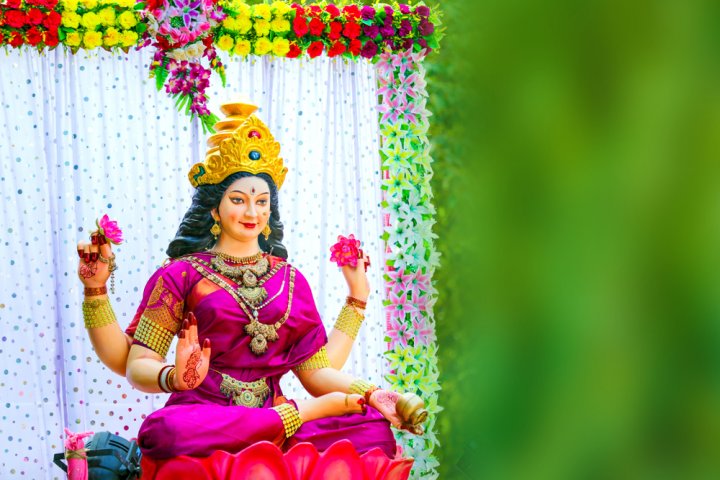 The Hindus give great importance to their Navratri Aartis. Not only do they freshen up and ensure that they have not consumed any non-vegetarian food, but they also put in great efforts to decorate their Pooja rooms where the deity is being worshipped. If you too want some ideas on how to decorate your Pooja rooms and all the other things associated with your Navratri aarti, then we have got you completely covered. Read the tips below:

This Festive Season, Decorate Your Home Like Never Before: 10 Quirky Decor Items for Home at Navratri (2019) 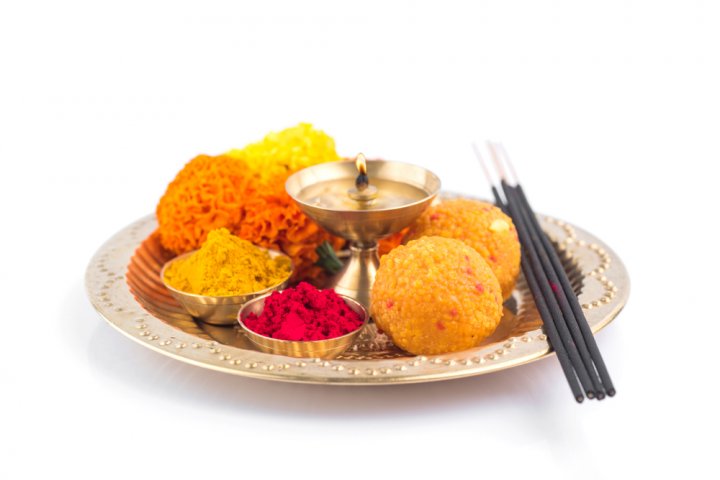 No aarti is complete without a beautiful Durga Puja thali that not only glams up the occasion, but also is a great opportunity to showcase your creative skills. A Navratri Pooja thali is used for offering spiritual prayers. There is a lit deepam inside with a wick dipped in ghee, two containers of kumkum and chawal, some sweet prasadam, some coins or currency notes and camphor. These thalis are rotated in clockwise direction in front of the deity along with the aarti hymns being sung. Later kumkum and chawal is smeared on everyone’s forehead. People put in more loose currency in the thali once the aarti is over. So when you decorate your homes with lights, sweets, rangolis and diyas, do not forget to decorate your aaarti thali too. 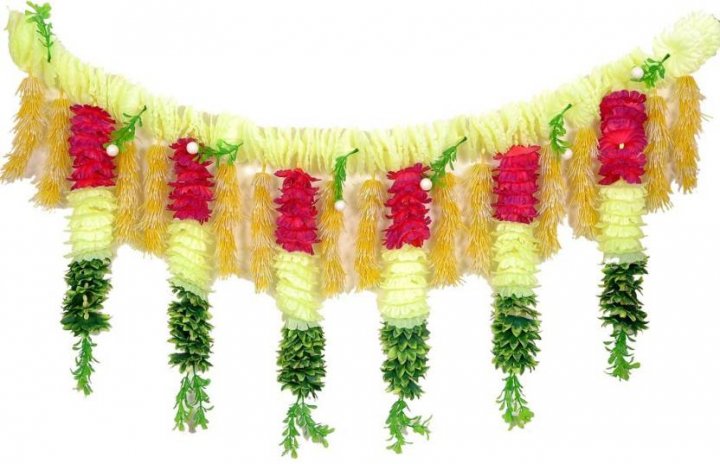 No Pooja décor is ever complete without pretty floral garlands elevating the aesthetic beauty. Flowers symbolise purity, fragrance, freshness and beauty. The Hindus always use flowers in their Pooja offerings. A navrathri aarti is incomplete without the offering of flowers to the deity. Flower petals are often plucked and collected in the aarti thali. These are offered to the deity after the final aarti is over along with chanting of hymns and mantras. Flower garlands are often the easiest way to add beauty and purity to your Navratri décor. Often buying ready-made flower garlands for your Pooja decorations gets too costly. But you can also make these floral garlands at home easily.

Here is a simple DIY video link which shows how floral garlands are made in India for Pooja purpose. You can decorate your Pooja rooms’ entrances by hanging these garlands. These flower garlands can also be used to place on the deity’s neck or on the feet. Small flower garlands are also often placed in the aarti thali and then given to the devotees after the aarti is over.

Readying Your House for Diwali Celebrations? Here are 10 Flower Rangoli Design Ideas for 2020

Rangolis are an important part of any auspicious occasion in the Hindu culture. People in the south make pretty rangoli decorations outside their homes believing that the Goddess Lakshmi will be happy with the decorations and come into their houses. It also adds allure and beauty to your celebration. During Navratri, women make pretty rangolis with powdered dry and coloured sands or from flower petals to decorate their houses and Pooja rooms. You also get ready-made rangoli designs today, which can be placed on the floor to have your rangoli design ready instantly. This is more practical for those who do not have the time to make a rangoli design from scratch and yet want to elevate their Navratri aarti decorations.

For those who want to make Rangoli patterns at home for Navratri, the following DIY task will give you some ideas: 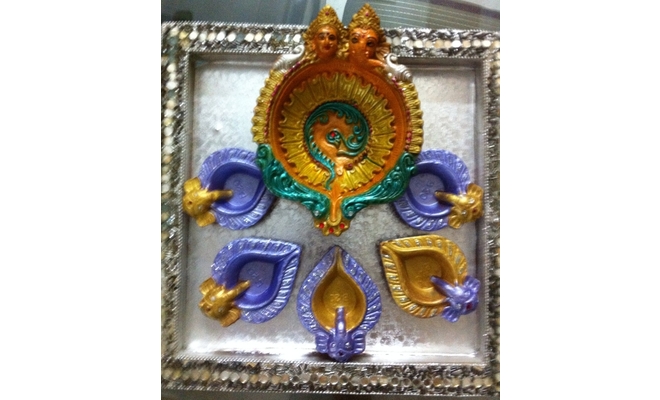 Deepams are the most essential part of any aarti. Fire is considered pure and it illuminates all darkness and ignorance. No Pooja ceremony is complete without the lighting of the lamp. A diya is also lit before the beginning of any auspicious ceremony. For your Navratri aarti decorations, you can paint your diyas to make them look beautiful. You also get ready-made painted and decorated diyas in the market. These diyas are placed in front of the deity’s idol and also kept in the aarti thali. A hand painted diya is always more special than the one purchased from the store as it showcases your interest in the tiniest aspects of your Navratri decoration and also gives you a chance to display your talent.

So if you want to paint your own Navratri diya, here is a small DIY task guiding you how to start:

Pooja Items Made of Silver Not Only Last Longer but Also Beautify Your Mandir: Here are Some Wonderful Silver Pooja Items with Price (2020) 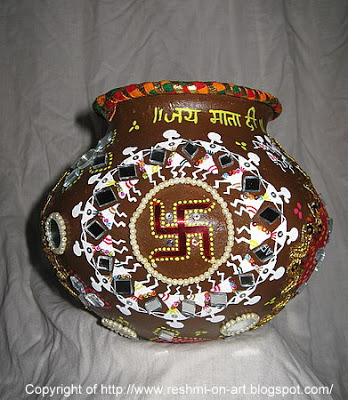 Just as diyas are an important facet of your Navratri décor, so are matkas. Garba decoration or the ‘Garbu Matki’ suggest decorating earthen matkas for garba. People in the ancient days used to carry their own decorated matkis while performing the garba dance. Matkas are big and so one has a lot of space to imprint their ideas on their surface. This link suggests a Garbu Matki with holy swastika sign, bandhani fabric and warli art – all of which boast of Gujarati culture. If you have any other designs in mind, you can decorate your own matkis and place them near your goddess idol or hang them together in a string and tie the string on the wall. 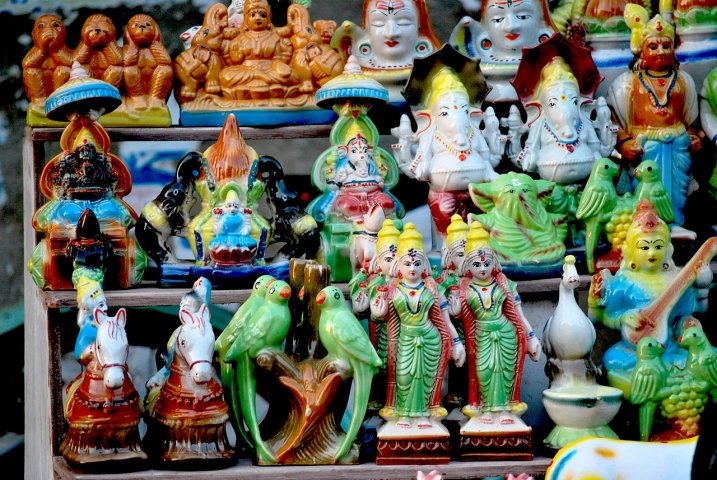 People in South India celebrate Navratri by worshipping their golu dolls. These dolls are pretty clay idols of Gods and Goddesses which are set in a particular pattern for 9 days and worshipped. You can buy these dolls online and then arrange them in your Pooja room or in your hall along with other Navratri decorations.

These dolls are arranged in an odd number of tiers to tell a story. Goddess-related themes are followed for the decoration pattern. The golu display is a very common and highly anticipated festival in South India when families visit each other and exchange gifts. They also have prasadam together and sing devotional songs.

10 Miniature Doll Gifts for When You Want to Give Something Traditional, Handmade or Quirky! Also Read What Makes These Dolls Special (2019) 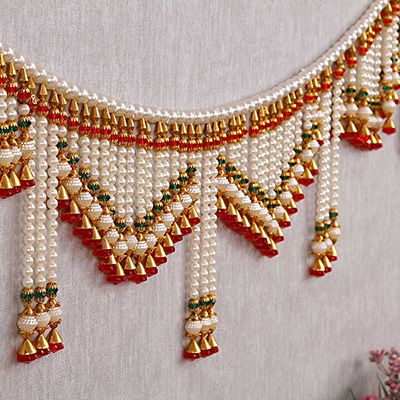 Finally, the last item to complete your Navratri aarti decoration will be a toran. Ideally, these were made with mango tree leaves, but today, these are made in varied colourful and pretty designs and hung horizontally or vertically on the door entrances. So if you want to celebrate Navratri in the typical way without missing out on any decoration, do get these torans outside your main doors or Pooja room doors before you commence your aartis. When the whole house gathers for aartis, these torans will make your decoration look traditional and beautiful. 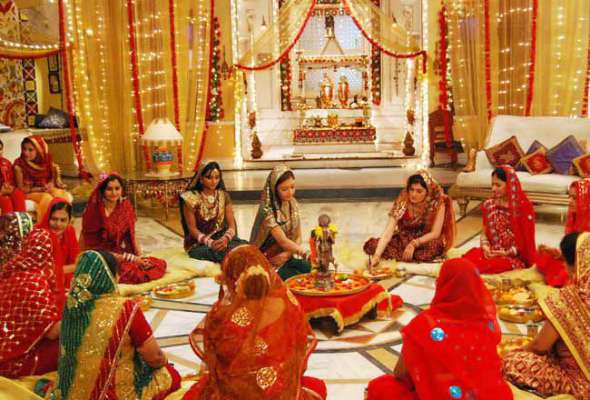 The online e-commerce sites offer a whole plethora of Navratri aarti decorations online, which make it easier for you to make your décor look perfect. Browse through a few of these listed below along with the sites they are available at.

No Pooja Is Complete without a Lamp: Let Your Spirits Flow with Our Silver Lamps Plus Tips to Experience the Light of Joy (2020) 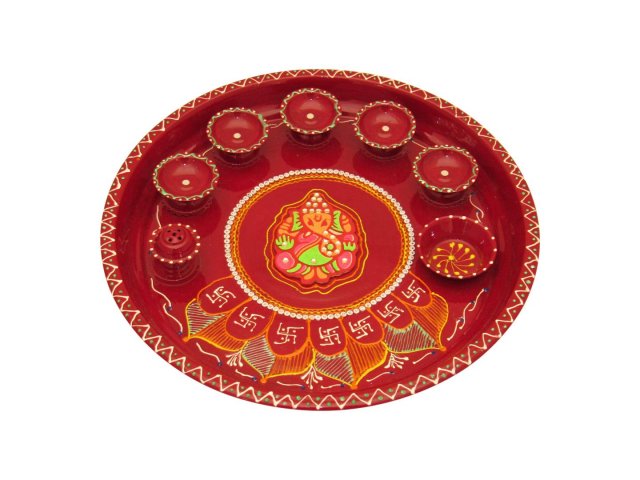 Grab this pretty aarti thali from amazon to complete your Navratri aarti decoration. Priced at Rs.335 on Amazon, this one has a pretty Ganesha image in the centre and plenty of containers to put your haldi, kumkum, chandan, chawal and Prasad for your aarti offerings. There is a red decorative diya and an incense stand too. The thali is quite big to keep your flower petals too. This thali is just perfect and also light weight at the same time. 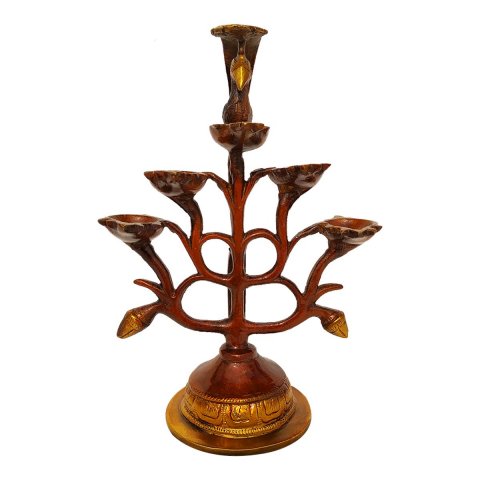 This antique brass 5 diya stand will complement your aarti decoration like none other. While you have your diya lit in the aarti thali, this additional diya stand will ensure that there is enough illumination while you are performing your aarti. Grab it from Amazon for Rs.2,340. It is made of brass and is quite durable.

Your Temple at Home isn't Complete without a Customary Diya or a Kundulu: 10 Graceful Silver Kundulus for Your Home or for Gifting (2019) 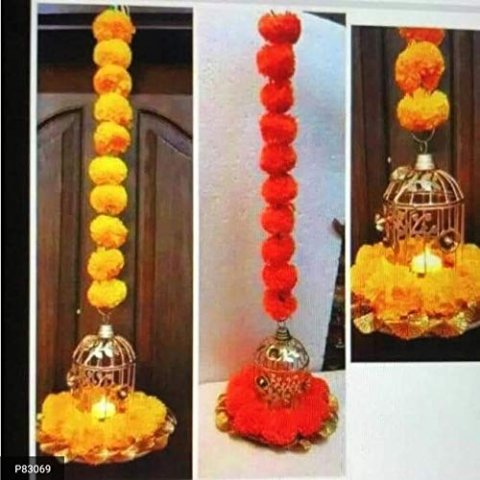 This cage wall door hanging makes a ready-made pretty toran for your Navratri aarti decoration. Priced at Rs.488, these torans are very easy to use. These are made with artificial flowers and pretty metal cages added in the end. Get it from Amazon.

Kindle your Navratri fervour by taking your Aarti Decorations to the next level! Life is made fun and exciting, when you try to keep up with our ancient traditions and customs. Putting an extra effort in making our decorations sync with our traditional customs makes our ancestors happy and also lets our younger ones know the significance of our Indian culture. This Navratri, ensure that you incorporate every element in your aarti decoration and spread festive vibes in the house.