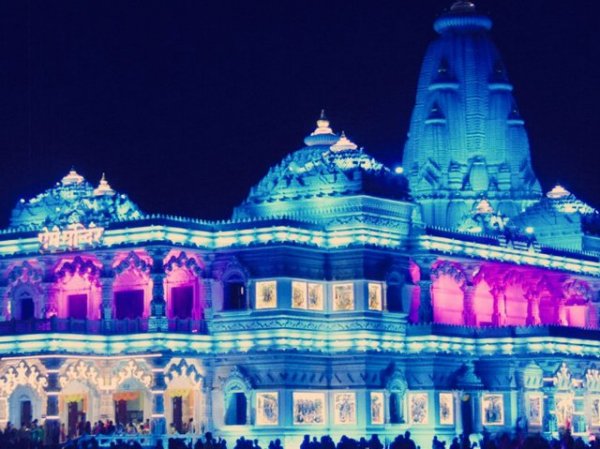 For Those Who Want to Explore the Cultural Roots of India: 10 Best Places to Visit in Vrindavan in 2019

Lord Krishna is the most revered deity all across India. If you want to know him from up close, you have to visit Vrindavan. Come here and experience the sobriety and compassion in the hearts of people and you'll think you belong here. Don't forget to check out these places in Vrindavan when you plan your trip. 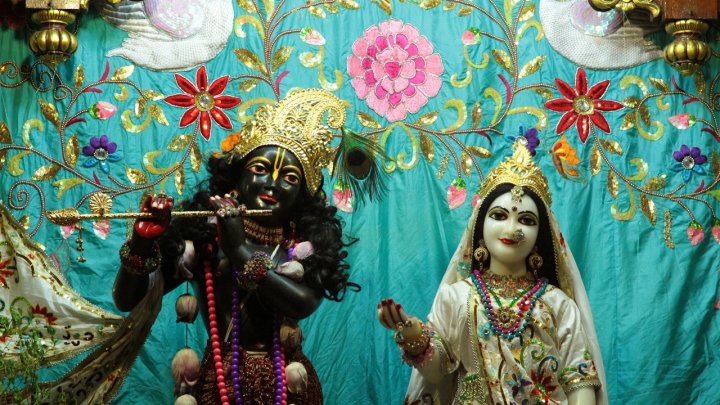 Vrindavan is a holy pilgrim center that is synonymous with Lord Krishna. It is a must visit for people who want to experience spirituality and the essence of Hindu culture. The pilgrim site attracts lakhs of visitors every year and exudes an aura of calmness. The festival Holi is celebrated with great pomp among the residents of Vrindavan. 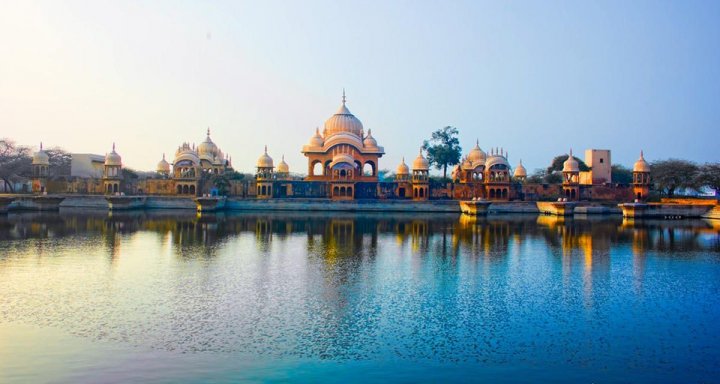 The city derives its name in Sanskrit from the words vṛndā meaning holy basil’ and vana that represents ‘a grove or forest’. It is a historical city in Mathura district of Uttar Pradesh, India. According to various religious texts, it is specified that Lord Krishna spent his childhood years in Vrindavan. The town is located around 11 km away from Mathura, considered to be the birthplace of Lord Krishna. The city is home to numerous temples that are built to worship Lord Krishna and his female consort Radha.

History of the Holy City

Located on the banks of river Yamuna, this famous city has witnessed many important events in the course of its rich history. It is said to be the place where Krishna performed a divine dance with his Gopis, spread his message with his consort Radha, and also defeated an entire succession of demons on the banks of the river. This is where the city derives it's spiritual significance from and has drawn many people over the years.

Centuries later, Indian philosopher Vallabhacharya visited the city when he was 11-years-old and eventually settled down here as well. The city was rediscovered in the 16th century as Vrindavan with the intention of locating the lost holy places associated with Lord Krishna. An ardent devotee of Krishna, the female poet Mira Bai spent the last years of her life in Vrindavan singing hymns about him. 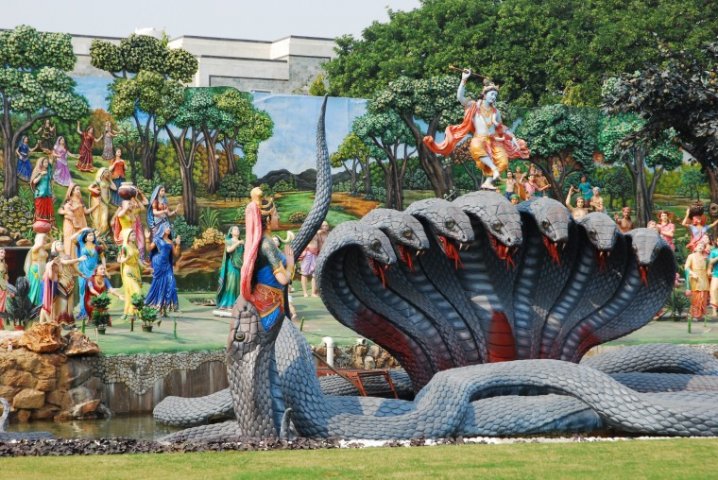 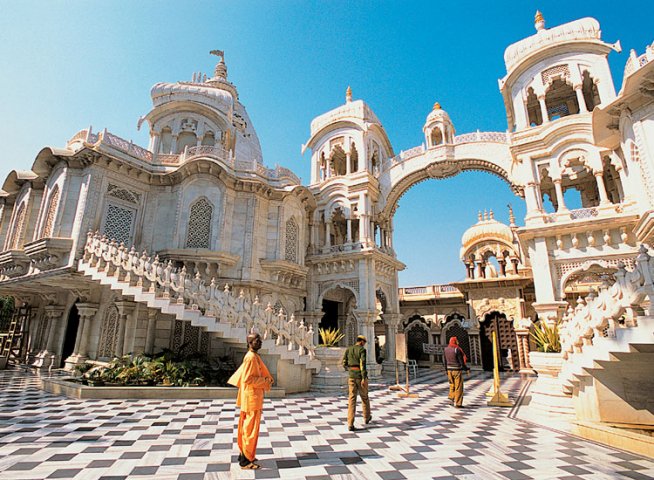 The ISKCON temple, also known as Sri Krishna-Balaram Mandir, is a popular temple situated in Raman Reti, Vrindavan. The temple was inaugurated in the year 1975 on the auspicious event of Ram Navami. It is the first temple to be built by the ISKCON society. The temple is made of beautiful white marble and comprises of three sanctums

. The main deity of the temple is Lord Krishna flanked by Radha Krishna with Lalita and Vishakha. The tomb of Swami Prabhupada is located on the premises of the temple and his house was later converted into a museum after his demise. The temple houses a guest house, restaurant, goshala, and a gurukul. The birthday of Lord Krishna, Janmashtami is the main event that is celebrated with much pomp besides others. 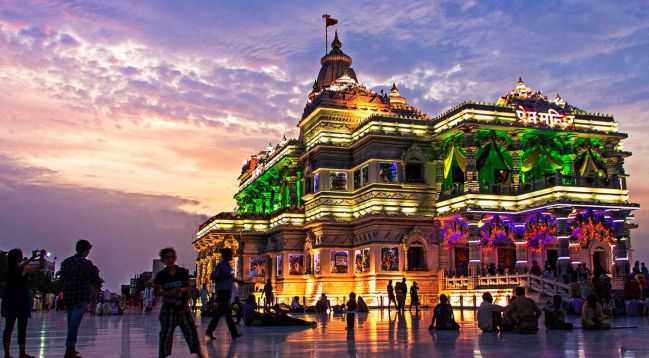 Besides Vrindavan, Mathura is another holy city for Hinduism. The place is of historic and religious importance in India. The city is home to multitudes of temples belonging to various Hindu sects. According to religious texts, Mathura is believed to be the birthplace of Krishna that is located in the Krishna Janmasthan Temple Complex. It is also considered as Sapta Puri, one of the seven cities that is considered to be holy by Hindus.

The city is famous for its Kesava Deo Temple that was built during the ancient time and also considered to be an underground prison. This city is also chosen as one of the heritage cities for the Heritage City Development and Augmentation Yojana scheme of Government of India. 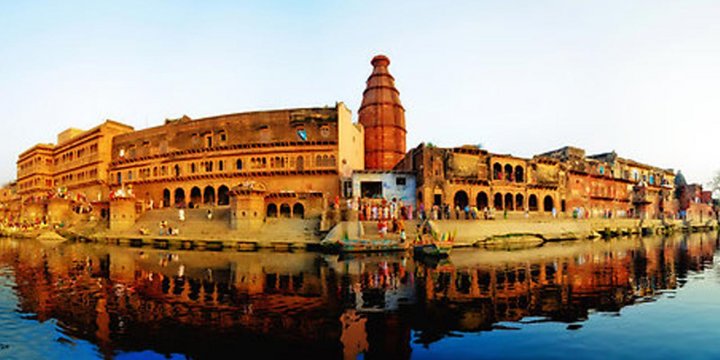 Keshi Ghat is located in the main ghat of Vrindavan and is considered to be one of the prominent religious sites. The Keshi ghat was built by Queen of Bharatpur, Laxmi Devi in the 17th century. It boasts of Rajasthani cultural architecture and only a small part is visible as a part of the ghat tradition in Vrindavan. The ghat comprises of numerous ancient temples.

According to mythology, this is the place where in dwapara yuga, Lord Krishna killed the horse demon named Keshi. The ghat is famous for performing a traditional 500-year-old ancient puja performed for goddess Yamuna. The tradition is still kept alive with Yamuna maha-aarti that is performed every evening on the bank of the river. A person who performs the Pratham din puja is said to receive the divine blessings of goddess Yamuna. 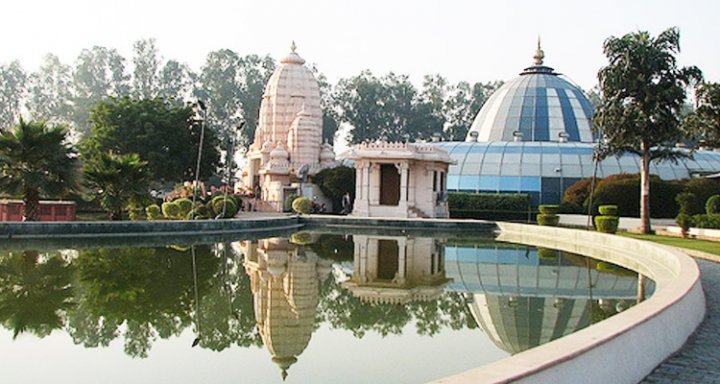 Located in the outskirts of Vrindavan and located nearer to the ISKCON temple is a temple named Radha Vrindavan Chandra Mandir. The temple is built in the form of a blooming lotus. The temple is exclusively dedicated to Lord Krishna, and is also fondly known as Akshaya Patra temple. The temple complex boasts of a huge centralized kitchen that whips up delicious lunch for poor school children in and around Vrindavan.

The huge kitchen is bestowed with state-of-the-art facilities for making a clean and nutritious meal for children. In Sanskrit, Akshaya means never-ending whereas Patra means a vessel. The people in the kitchen make tons of rice, vegetables, and rotis in a few hours and dispatch it to every nook and corner before the lunchtime of school students. 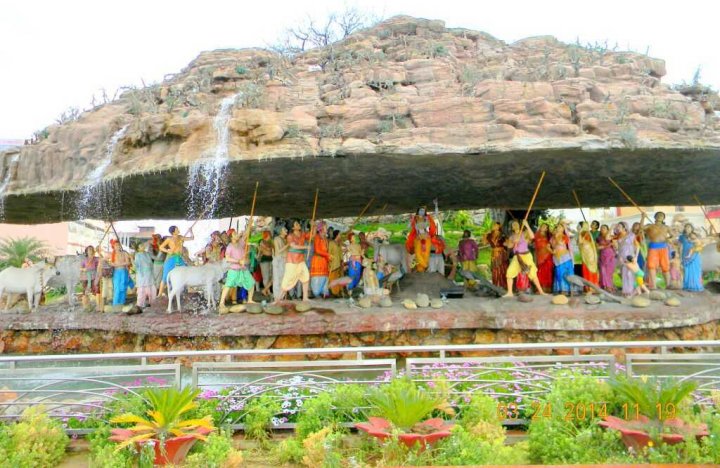 Also known as Giri Raj, is a place that is situated on the outskirts of Vrindavan. The hill is worshiped and given the same respect as any sacred idol. The hill is made of sandstone and stands at a height of 80 feet. The people visiting the hill can also see the Mansi Ganga, Mukharvind, and Daan Ghati.

According to religious texts, it is said that Lord Krishna lifted the Govardhan Hill with a single finger to protect it from flooding due to a severe thunderstorm. Due to this record, the hill is considered to be very sacred and is visited by flocks of pilgrims on the eve of Guru Purnima. The devotee walks the entire stretch of the hill barefoot to seek the blessings of Lord Krishna. 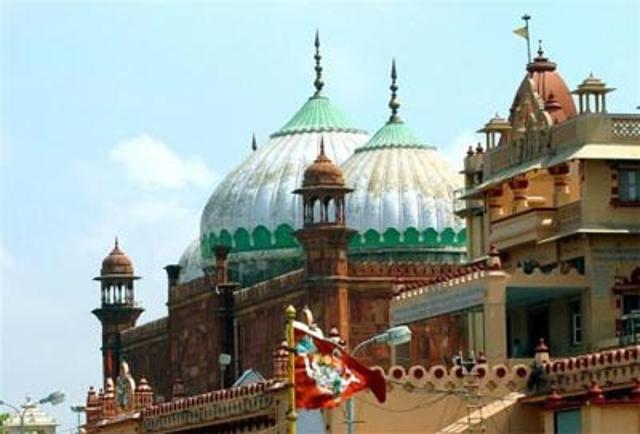 The city is not only famous for its temples but also the Jama Masjid. The iconic mosque is located in the vicinity of Janmabhumi temple complex. It was built in the year 1661 under the supervision of Abo-in-Nabir-Khan who was the governor of Mughal Emperor Aurangzeb. The mosque is famous for its intricately decorated minarets that are mesmerizingly beautiful. The minarets are vibrantly decorated with coloured plaster mosaic, a few them exist today. 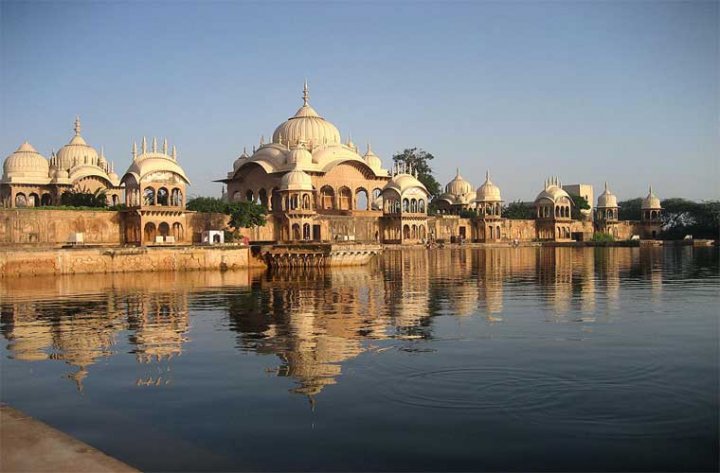 The Kusum Sarovar is a historic sandstone monument that is located on the Govardhan hill on the outskirts of Vrindavan. In Sanskrit, Sarovar means lake while Kusum represents flowers. The Sarovar and the surrounding gardens were constructed by the Jat ruler Bharatpur.Maharaja Suraj Mal for his beloved queen Kishori

The building, along with the cenotaphs of the Bharatpur royal family was constructed by Maharaja Jawahir Singh in the honour of his father. An imposing chhatri of Maharaja Suraj Mal along with his wives are intricately designed. The architect and carvings are done in a pierced stone and the cenotaphs are adorned with beautiful paintings of Lord Krishna. 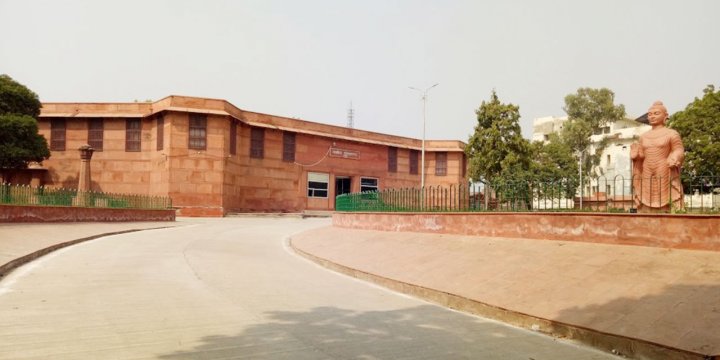 The government museum also known as the Mathura museum is an archaeological museum located in the outskirts of the city. The old museum was founded by Sir F.S.Growse in 1874. The museum was initially named as the Curzon Museum of Archaeology but was later renamed.

The museum is home to various artifacts such as pottery, paintings, and coins, collected from the archaeological sites in Mathura. It also houses the collectibles made by colonial archaeologists such as Alexander Cunningham, F. S. Growse, and Fuhrer. The museum is also home to ancient sculptures from the Mathura school dating back to 3rd century BC to 12th century AD from the Gupta Empire. 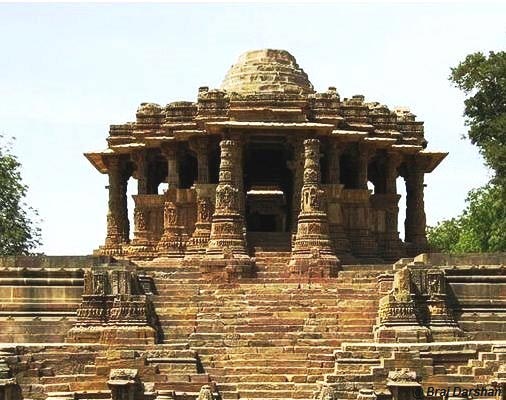 The Kans Qila is an ancient fortress located on the banks of the legendary Yamuna River. The monument is dedicated to Kansa, the maternal uncle of Lord Krishna. The ancient monument is located near the Krishna Ganga and Gau Ghat. It is a site that is flocked by numerous tourists.

The monument is a fusion of Hindu and Muslim architecture. The ancient monument was lost to the vagaries of weather but was later restored in the 16th century by Raja Man Singh of Amber. Later, an observatory was built by Raja Sawai Jai Singh of Jaipur. 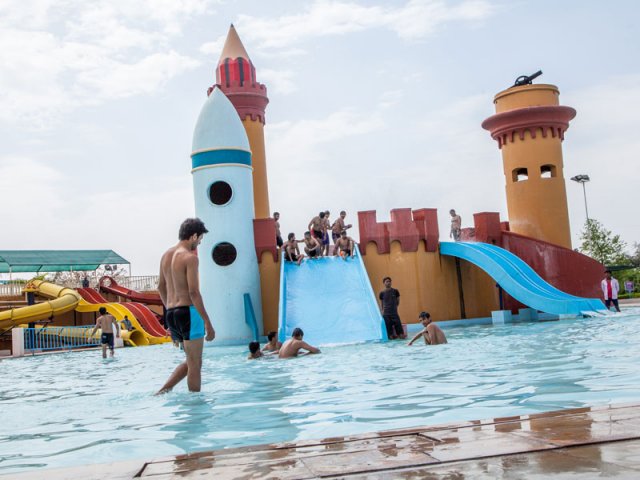 The Dolphin water park was constructed in 2002 and is spread over 14 acres. The water park is located on the Vrindavan Mathura road and boasts of thrilling water slides, roller coasters, water rides, and regular rides.

The water park also comprises of an amusement park, kids play area, locker room, restaurant, and other facilities. The park is a source of recreation and entertainment for people visiting Vrindavan. The facility consists of a swimming pool separately for kids and adults.

Things to Never Miss in Vrindavan 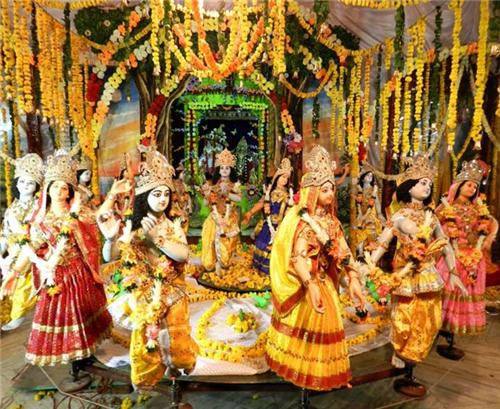 The city of Vrindavan is congested since it is an ancient town that is made of narrow lanes. The best way to explore this ancient city is by foot or a cycle rickshaw. The city is laid back and possesses an old world charm. The city is famous for big vintage doors that are bolted and secured with huge locks. Experience the ancient city in all its glory by travelling through the narrow lanes.

Besides these, there are a few things to absolutely experience when you are in Vrindavan.

Don't Forget to Visit these Places when Travelling to the Abode of Lord Krishna, Vrindavan

India is a country of diverse cultures and folklore. Indian mythology is famous all around the world. For all the traditional travellers, who want to re-live the old world charm, visit Vrindavan in 2019 and don't forget to check out these places. It will be a break from regular travel destinations.