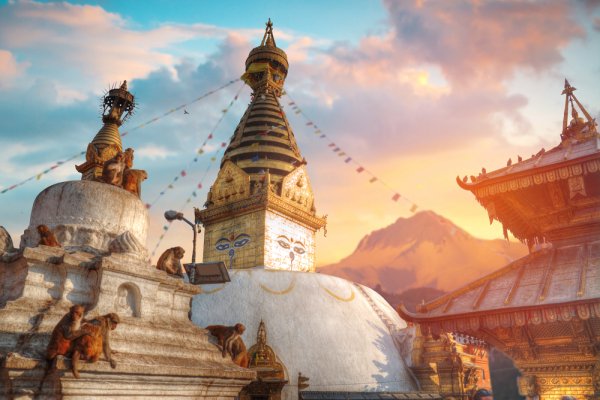 Most people use Kathmandu as a quick jumping off point for a trek to the Himalayas, but it's worth spending a few days exploring this ancient Nepalese city. So sit back and check out our Kathmandu travel guide featuring the 10 best places to visit in the capital city of this fascinating Himalayan kingdom. 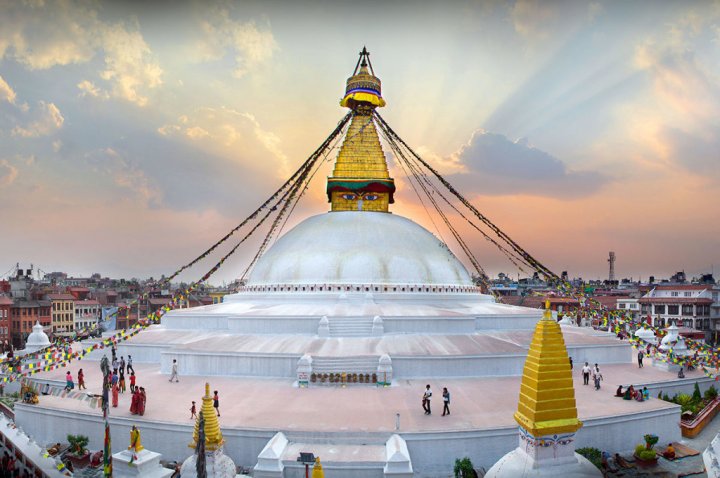 Kathmandu is the capital as well as the largest city in Nepal, and it is also famous as the cultural and art centre throughout history. Jaw-dropping in its beauty and history, this hilly area explodes with beautiful sights, sounds and smell. It is a global destination known for its pleasant mountain climate and unmatched natural beauty. The best time to visit Kathmandu is from March to October as you can enjoy the summer weather with nature and hop the place experiencing food, festivals and events. 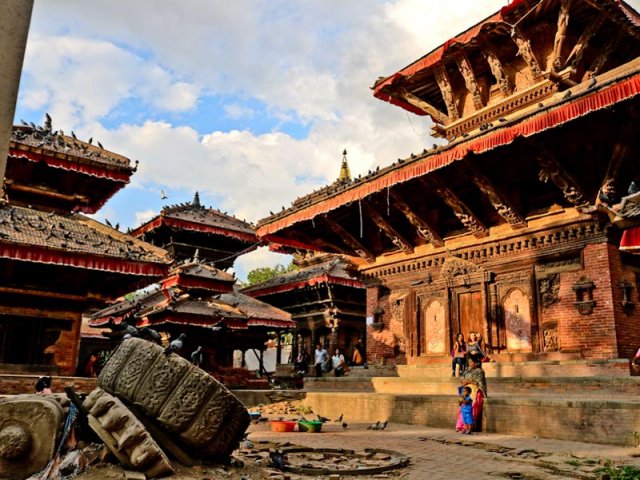 Durbar square of Kathmandu can be called as the landmark of the historical attraction of the city, and it is the immediate large square surrounded by ancient Newari architecture, royal palaces, high temples and famous shrines. It is located in the area opposite the old mansions in Kathmandu. There are three Durbar Squares in Kathmandu – Kathmandu Durbar Square, Bhaktapur Durbar Square, and Patan Durbar Square. Kathmandu Durbar Square is an active living place filled with people worshipping in shrines, selling various goods or simply strolling around. UNESCO is restoring the south of the Durbar Squares after the severe damaged in the earthquake of 2015, but the northern section remains intact till now. It is an active public walkway which links many streets. The locals can pass through and leave as needed, yet the tourists are charged for their entrance. 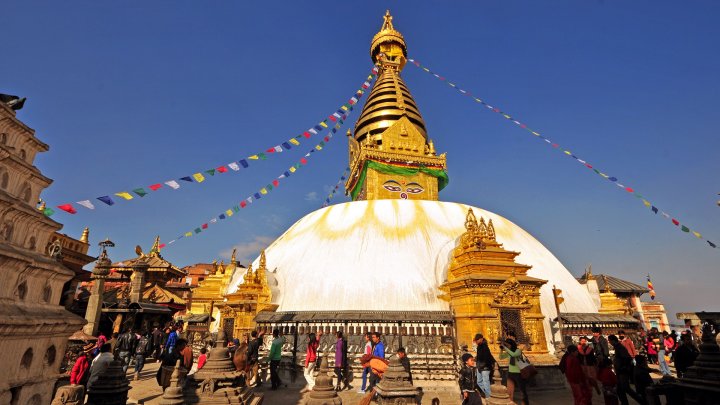 When you are in Kathmandu, you are definitely on an urge to find peace and prayer. In the north-west of Kathmandu valley, the little hillock of Swayambhunath which is also popularly known as ‘Monkey Temple’ is a beautiful place which gives a panoramic view of most of the city. The glory of Kathmandu is said to have begun from this point of the journey. ‘Swayambhu’ which means King Manadev around 460 AD, built self-existent one, and it became an important centre of Buddhism by the 13th century. The shrine is perhaps the best place to observe the religious harmony of Nepal. Be prepared your way up to 365 steps to meet some furry friends in this place.

Swayambhunath temple consists of shrines, temples and magnificent domed stupas. Each temple is richly decorated with gold and colourful flags. The sight of the summit is worth the trek of climbing to the temple. The large gold plate ‘thunderbolt’ or Vajra is set on the east side of the Stupa, and the Buddha statue is situated on the west-side. If you want to visit the lace with children or disabled person, a bit of planning can be remarkably hassle-free. Travelling with any age of children or any level of a disabled person is not advisable to certain areas. The temple is easily accessible by foot, bike or cab from Kathmandu. This UNESCO World Heritage Site has the admission fee of Rs.200. 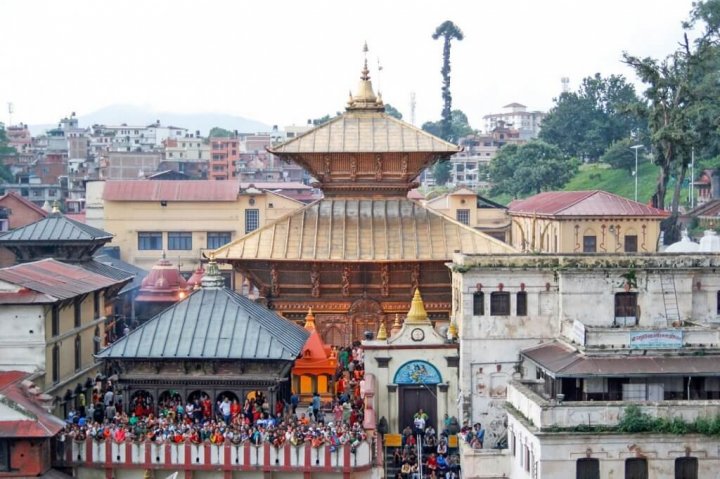 Pashupatinath Temple is the oldest Hindu temple complex in Nepal which is dedicated to the Lord Shiva Pashupatinath. This complex area is a part of UNESCO World Heritage Site, and it includes 518 temples, buildings and structures. The main temple is located within the courtyard and features of the main pagoda which provides for carved wooden rafters, two-level roofs covered with gold sheets and cubic structures. There are four main doors of the pagoda which are covered with silver leaves with golden pinnacle. You can explore 492 temples, 15 Shivalayas (shrines of Lord Shiva) and 12 Jyotirlinga (phallic shrines). It is also a cremation site for Hindus. The temple is open from 5 am to 12 noon for viewing, sightseeing and morning worship and then from 5 pm to 7 pm for the strolling and worshipping. Apart from the daily rituals and devotion, you can also observe special rituals during essential dates of the lunar calendar. 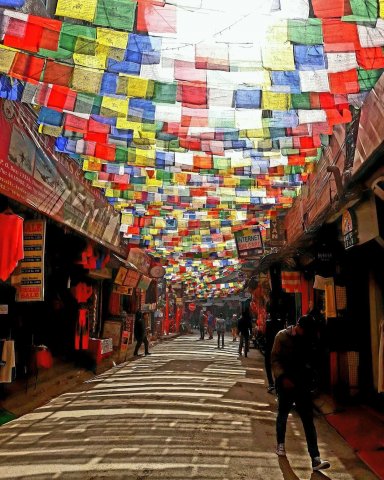 If you are planning to visit Kathmandu, you would love to get souvenirs for your loved ones, as well as shop for yourself too. There is no better place than the most popular tourist spot where you will get a huge number of street vendors with souvenirs and flutes. When the tourist from abroad think what they should see in Kathmandu, Thamel central is the ultimate place to chill out in the city. It is convenient to walk around, and there are plenty of stores selling trekking gears and souvenirs, you can exchange currency easily here, you will also get foods, bars and bakeries all European style. Nowadays, due to the heavy crowd, it is becoming somehow unappealing to many tourists, but it still manages to retain the old flavour and feel, with the hanging Tibetan prayer flags and cycle rickshaws. Staying at Kathmandu has its charm, but if you are planning to have a few days more in hand to take some different flavour of the place, then 20 km east of Kathmandu has the beautiful Bhaktapur which can be reached from Thamel in 40 minutes by car. Bhaktapur is a historical living place which probably will remind you of the medieval cities of Europe. Narrow streets and brick buildings which several Hindu and Buddhist shrines can be found easily. In the past, as the capital of Malla Kingdom, it is a wealthy state judging by the architectural richness and variety of many temples, buildings and pagodas. The people of Bhaktapur are mostly Hindus and Newars, and the Newar culture is famous for its architectural uniqueness, which includes multiple-roofed pagoda and Newar windows. It is a carefully planned city with temples, many squares, sunken wells, courtyard and old streets. As one of the most ancient places in Nepal, with palpable spirituality and world’s kindest people around, Bhaktapur will make your stay a memorable one. 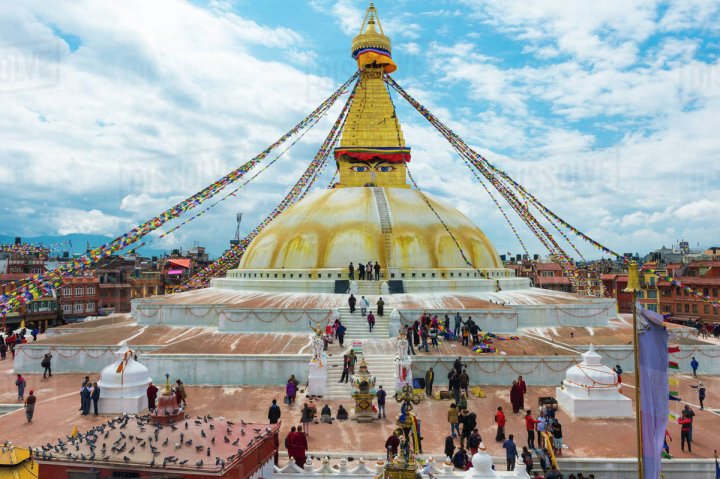 Boudhanath Stupa is also known as Boudha with its original name as Kashti Chaitya is an area about 7 kilometres from the closest airport destination, Kathmandu city centre. It is one of the largest 5th century Boudha Stupa in the world and a home for most important stupas outside of Tibet. Many Buddhists take a pilgrimage to Boudhanath, where the monks ritually walk around the Stupa. The surrounding of the Stupa has Tamang Gompa, which has a pleasant courtyard with numerous traditional shops selling thankas, prayer wheels, singing bowls and many more. Boudhanath Stupa is one of the most liked sightseeing places in Kathmandu, and it has private sightseeing day tours, which can be helpful for foreign visitors. 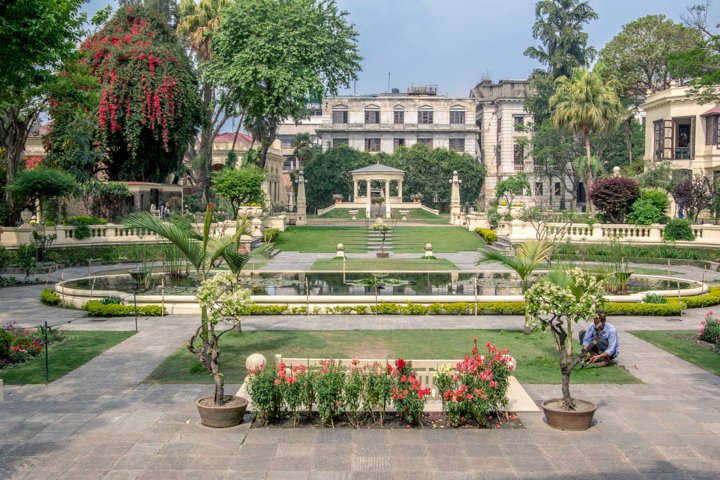 Garden of Dreams is also called ‘Swapna Bagicha’ is one of the most beautiful and serene enclaves of Kathmandu. It was originally named as ‘The Garden of Six Seasons’ after Nepal’s six seasons and was formerly a private garden. If you are at Kathmandu, you are surely looking for an escape from the hustle and bustle of the city and a relaxing time maybe after a week of sightseeing or trekking. The Garden of Dreams is a perfect place for that. It is located in between the Thamel Marg, and Kantipath on Tridevi Sadak. There are dozens of gorgeous details in the garden like the original gate, fountains and ponds, the ‘hidden garden’ in the south, and so on. This neoclassical historic garden is a great place to get your souvenir, get a map and roam around. 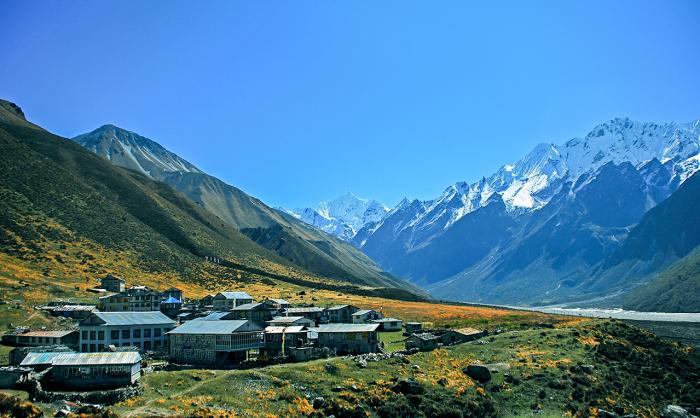 Like the Everest and Annapurna trails, the Langtang region is a well-popular destination with a wide range of stunning scenery and trekking experiences. It is the home for several mountains and a loved place for tourists regarding trekking and mountain climbing. It is located in the northern side of Kathmandu, and it borders with Tibet, and it also has the Langtang River flowing as a major tributary of the Trishuli Ganga. The dominant inhabitants of the Langtang are the Tamang ethnicity, and their lifestyle reflects rich Himalayan heritage. The Langtang National Park is located in the same Himalayan belt as the Langtang Valley. It is best to visit Langtang for trekking during Spring and Autumn season for a crystal clear mountain view without any clouds and fogs. 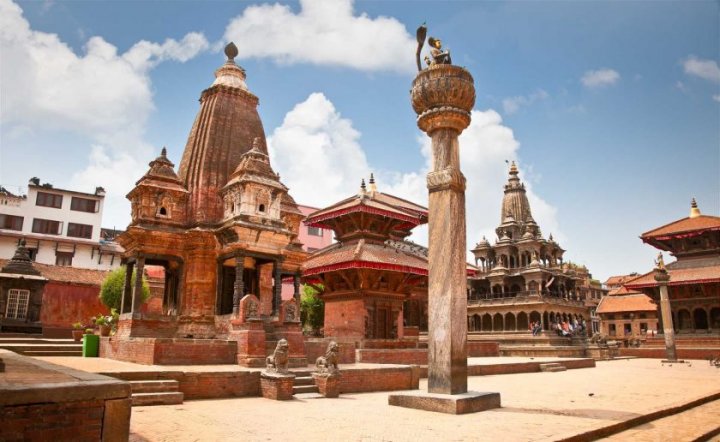 Among the largest heritage cities of Kathmandu Patan lie in the south of Kathmandu city within the Kathmandu Valley. Patan is famous for its adjacent Durbar Square, the Patan Kumari and the stone and metal workings. It is a popular day trip option for the tourists as there is an easy way to reach Patan by a short bus ride or taxi ride in just 30 minutes. Besides, the Patan Museum is a must-see place if you visit there and it is a traditional centre for handicrafts, jewellery, masks and Buddha statues. 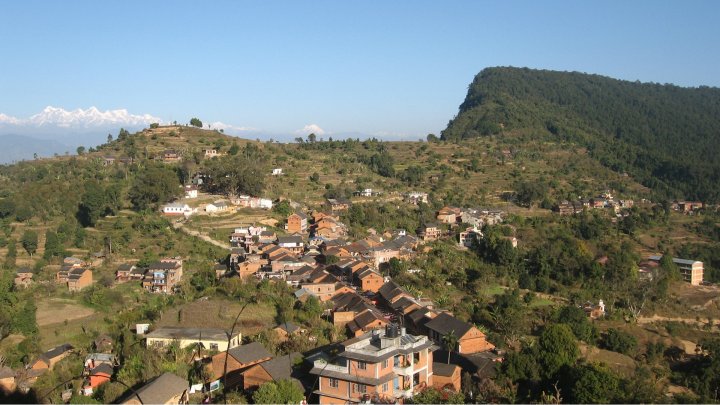 Bandipur is one of Nepal’s most charming towns as it can also be called as a living museum of the Newari culture. It took a lot of effort to preserve the magic and developing the town together. It gives a distinct European feel with its 18th-century architecture, cafes and lodges, pedestrian one and outdoor dining. For centuries it has been an important trade route between India and Tibet until the bypassed way of Prithvi Highway in 1960. In the mid-way of the trip between Kathmandu and Pokhara, the Newar town Bandipur can be found with its intact age-old flavour. You can do for the historical trail at Dumre Bazar to a town that has fully changed or climb through the pristine forest. The rich hill, gorgeous mountain views and hiking will make your day for sure.

What to Do Other than Visiting Places at Kathmandu 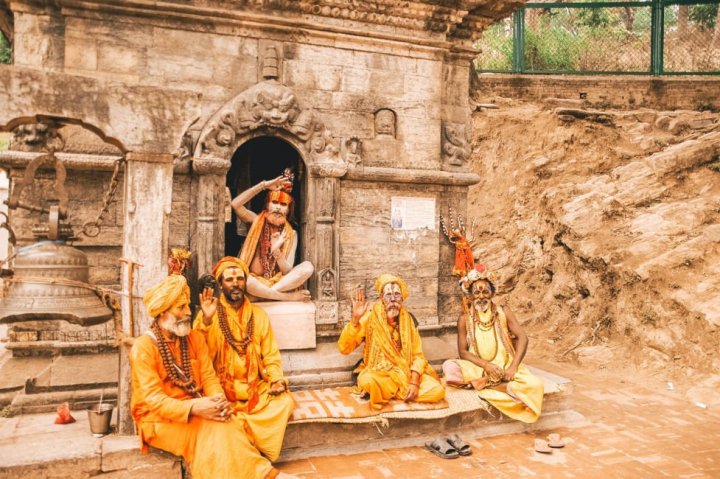 Try local food: Among much famous Nepali foods, you can try the gluten-free but heavy, vegetarian-friendly like dal-that, momos, Newari cuisine, Sel roti, samosas, panipuri and even the ‘Everest beer’ which is the local Nepali beer. You can also opt for some sweet and spicy foods like dim sum and dumplings, lakhamari and more.

When you think of Nepal, what comes to mind? Mt. Everest is probably at the top of your list, and it’s no surprise – it’s the tallest mountain in the world! The most popular times to go trekking in Nepal is February through May, and September through October, when the weather is clear and there are pleasant temperatures.

Do not trek alone. There have been numerous disappearances of solo trekkers in recent years. Always hire a guide or trek with other people. There are online forums where travellers can look for fellow-trekkers. This applies to everyone but especially women that are travelling single – they seem to more vulnerable. Always communicate your travel plans to your next of kin.