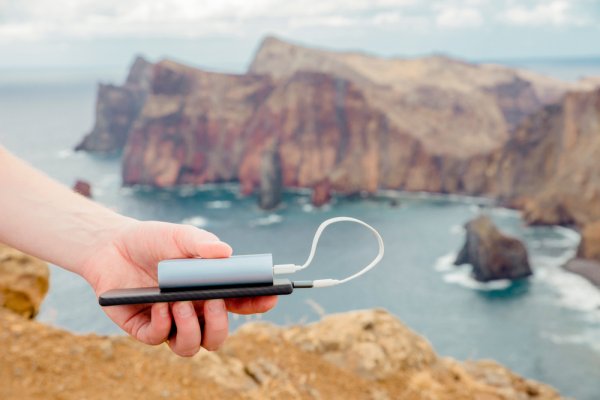 Are You Always Running Out of Battery or Need a Back Up for When You're on the Move? 10 Best Portable Chargers of 2020 for Smartphones and Laptops

How frustrating it can be when you are at a wonderfully picturesque spot but can not take a selfie because of no battery in your phone! If this sounds too familiar to you than you need our help in choosing the most suitable portable charger, so you can stay connected 'on the go'!

What is a Portable Charger? 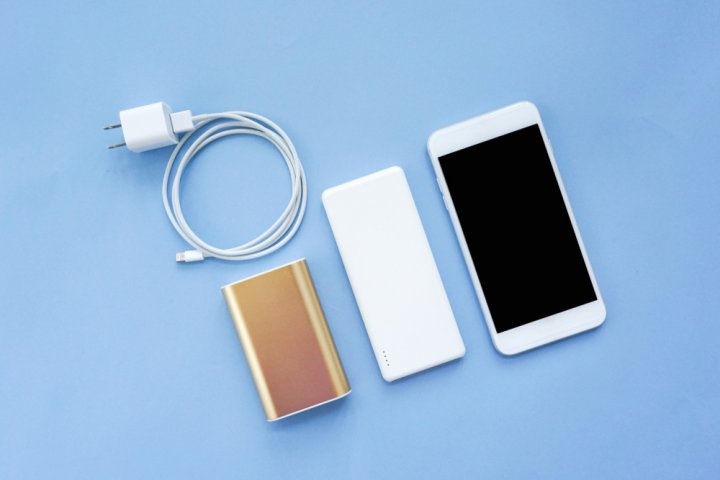 Till twentieth century, chargers was limited for cars, trucks or for the power back up of our houses, only. When we started playing the ‘snake game,’ on our little 2G mobiles, in the first decade of the 21st century; power was never an issue for the mobile phones, as the battery easily lasted for 2-3 days. But, with the introduction of smart phones equipped with numerous features and 4G services in the last few years, instant and portable charging for phone has become a necessity. Not only for phones, there are now many other gadgets which have become a part of our everyday life.

A portable charger or ‘power bank’, in general terms is a rechargeable battery which can be charged multiple times and then it allows us to charge our smartphones, Bluetooth headphones, Music players and laptop etc. multiple times while we are on the go. We can charge them whenever we want, without connecting to the socket. These portable chargers are small and handy and can be easily carried in our pockets or bags. Though, the power range of portable chargers start from 2000 mAh and can go up to 25 – 30k mAh (mainly for laptops), considering that most of the phones have their batteries in the range of 4000 to 6000 mAh; a power bank with minimum capacity of 10000 mAh is advisable.

Features Of A Good Portable Charger 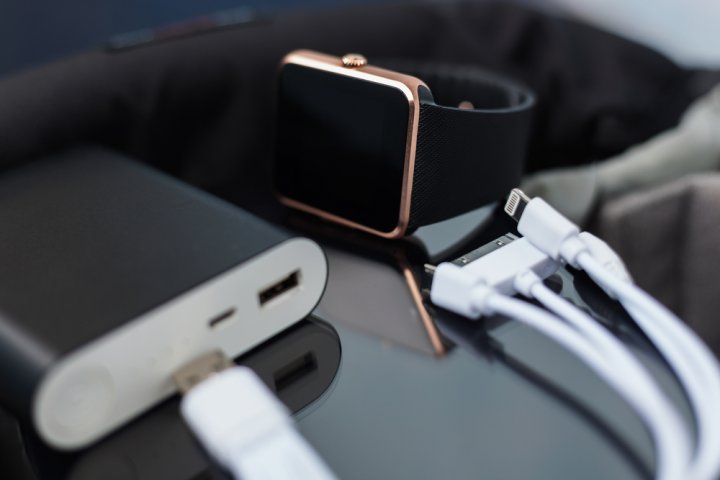 There are various portable chargers available in the market with different features like: power capacity, types of ports (Standard Micro-USB, USB-C), colours, batteries (Li-polymer or Lithium ion). There are power banks from different brands; too. Knowing the traits of a good battery is most important before buying one for yourself. First and foremost, what is the size and capacity of the battery? Can it charge your phone at least once? Will it easily fit in your pocket or can you hold it easily along with your phone? Check the specifications of the battery in terms of size and power. How many ports you would require while using it? Check for the input and output ports. Can it charge multiple devices at the same time or not?

Other important features to check are: speed of charging, pass through or wireless charging; which you may like to have in your power bank depending upon the genre of your smartphone. A simple smartphone may require a power bank with normal charging feature, while a high end phone would require a portable charger with the facility of fast and wireless charging. And do take a good quality charging cable, because a local and cheap charging cable may slow down the charging process. 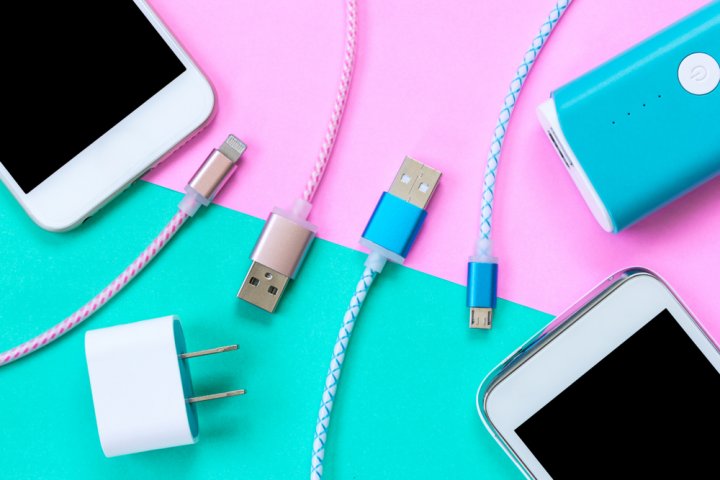 There are all kinds of portable chargers available for fulfilling the needs of almost every smartphone user. You can be an office person who needs backup for his phone while commuting or even an adventure enthusiast who may need the power bank when his phone battery is dead on top of a mountain. We have picked some of the most popular and useful portable chargers for your mobile phones, which are stylish and also provide good backup as well. 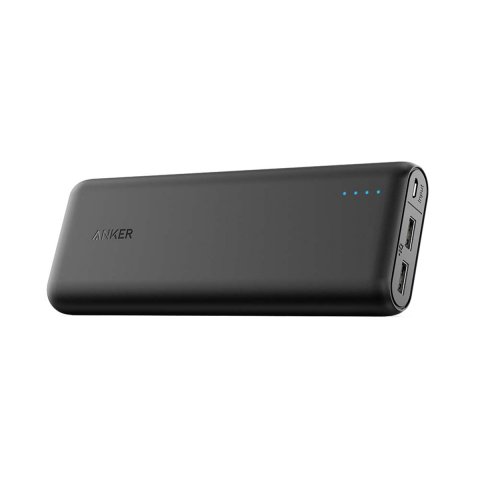 The Anker Power Core 20100 Power Bank has a solid high capacity Lithium Polymer battery, which provides 4.8 Ampere output and 5 Volts power with fast charging. The dimensions of this power bank are 16.6 x 5.8 x 2.2 cm and it weighs around 350 gm. The power bank has IQ technology, which makes it compatible for iPhone, iPad (lightning cable sold separately), Samsung Galaxy and other smartphones.

You can also charge two devices at the same time with the help of two Micro USB output ports. The packing also comes with a Micro USB cable, travel pouch, welcome guide and 18 months warranty card apart from the power bank itself. The matt finishing makes it look classy. Its anti-slippery finish also helps you to hold the device without leaving any fingerprints or marks on the surface of the device. The short circuit protection and surge protection feature keeps your device safe. This 20100 mAh power bank by Anker can be purchased from amazon.in for Rs. 2,469.00. 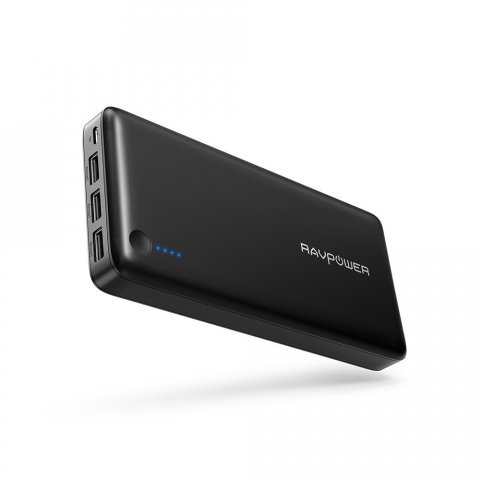 This is another portable charger with a mammoth 26800 mAh capacity. Once fully charged, it can recharge an iPhone 6 ten times and an iPhone 6 Plus or Galaxy S6 more than six times. The three ports provided in this power bank can provide a combined output of 5.5 V which means you can comfortably and simultaneously charge three devices at the same time.

The quick input charging option of DC 5V 2A charges the power bank 50% faster than the normal 1A chargers (charger is not included., Its scratch resistant body has dimensions of 17.2 x 8 x 2 cm though the power charger is a bit heavy at about 480 gms. The box contains 2 micro USB cables, 1 travel pouch and a user manual along with the power bank and it can be purchased from Amazon for Rs.9,469.

One of the most popular, economic and nice looking power bank is the 10,000 mAh power bank by MI. The Lithium Polymer Battery has a micro connector and it can easily be charged with an AC adaptor (charging cable included in the box). Two ways fast charging of up to 18 W lets you swiftly charge two devices at the same time. The smooth anodised finish makes it easy to hold and its corrosion resistant features, along-with the nine layers of circuit chip protection, ensure safety from short circuit. These features over-all improve the charging efficiency. The lightweight power bank by MI weighs just 276 gm and comes with a 6 month warranty. It can be purchased from flipkart.com for Rs. 899.00. 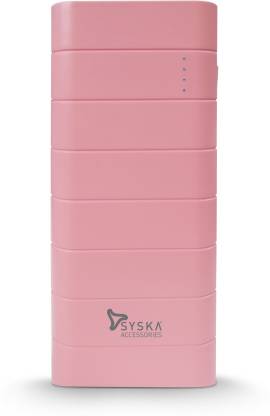 Another beautiful 10,000 mAh power bank is this one which is manufactured by Syska. This is preferred more by ladies due to its pink colour (though more colour options are available). The Lithium Ion battery weighs 285 gm and has dimensions of 6 x 14 x 2 cm. It can be charged with a power supply of DC 5 V / 2A.

The charger has LED light indicators to show the charging level of it. The power bank has two USB output ports, which can provide a combined power of up to 5 V / 2.1 A. It is made of ABS housing materia and, comes with a 6 months warranty and it can be purchased from flipkart.com for Rs. 549.00. 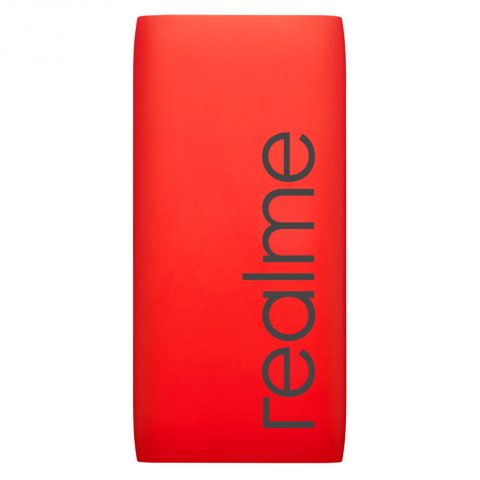 You can flaunt this cool looking power bank by Realme, which provides 10000 mAh of uninterrupted power supply and is available in 3 trendy colours. Its 12 layers of circuit protection provides safety from short circuits etc., and the dual output can provide a maximum power of 18W. Its quick charge function lets you charge your devices quickly and efficiently.

You can fully charge the power bank in just three and a half hours with a 9 V / 2A charger. You can charge multiple gadgets and devices like laptops, video game console. Its low current mode also lets you charge your wearable devices. The power bank retains its optimum capacity even after 500 charge–discharge cycles. This Realme Power bank is available on buy.realme.com for Rs. 1299.00. 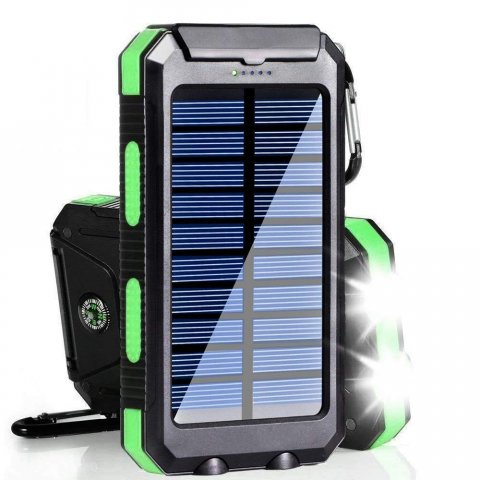 This multiutility solar charging power bank is equipped with a LED flashlight and a magnetic compass. It is quite useful for the frequent campers and travellers, as they are more suitable for places where you are completely off grid.Its dimensions are 14 cm x 7.7 cm x 2.2 cm, has 20,000 mAh battery, is waterproof and have LED battery capacity indicator. It has a karabiner to carry it easily with, an input of 5V /1A and output 5V / 1A (two devices can also be charged simultaneously). It has an anti-skid body and comes with a USB cable. This Solar Charging power bank can be purchased from banggood.in for Rs.1,024. 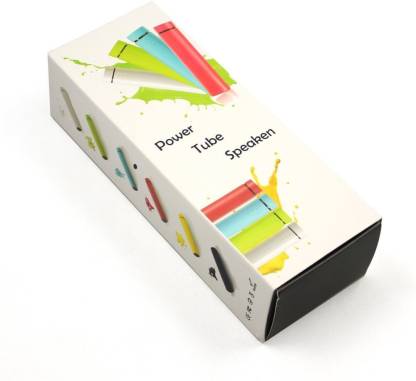 Last is this solar battery charger, which is completely waterproof and has a capacity of 10000 mAh with polymer Li Ion battery. It comes with dual USB DC 5V / 1A output charge for your devices. It charges fully on AC power in 5 to 6 hours and the body is made of ABS shell anti-scratch, anti-skid and anti fingerprint material. A USB cable and magnetic compass with a karabiner is also provided with the set. This waterproof solar charger can be purchased from thedelhihaat.com for Rs.1694.00. 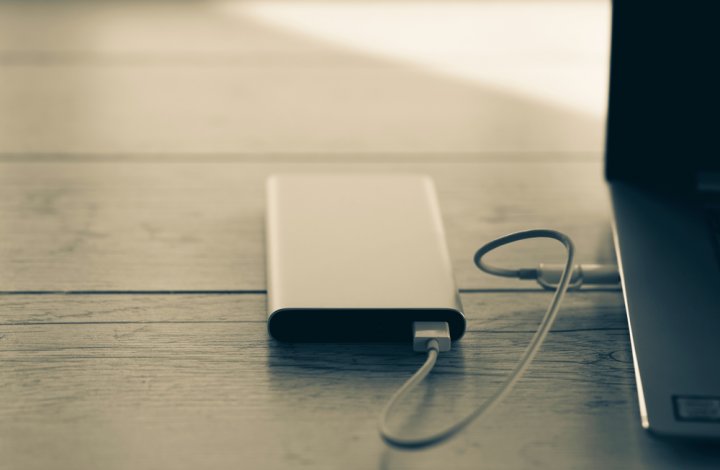 While mobile and tablet can be easily charged with power banks, which have a backup capacity of 10,000 – 15,000 mAh; for laptops, you might need portable chargers with 20,000 mAh or higher power backup. Though, a lot of options are not available in this range, but we have researched and picked the best ones for you. 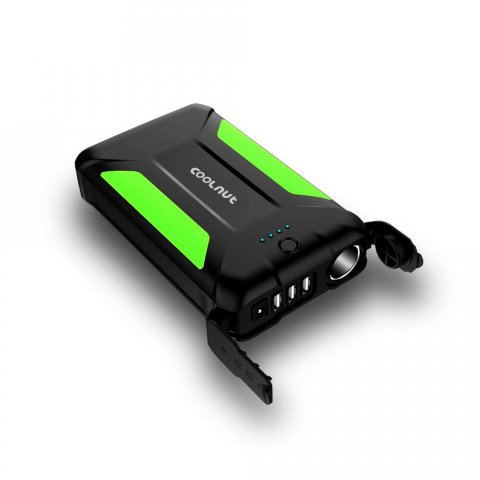 This massive 31,200 mAh battery of this power bank will swiftly take care of the power needs of any type of gadget like laptop, MacBook, iPad and notebook etc. It provides 150W AC output and has 3 output ports, so you can charge up to 3 devices simultaneously on this portable charger. Fast charging feature is also present in this device to take care of your mobile phones. You get a charging power adaptor, an AC inverter, user manual and 36 month warranty card along with the Coolnut power bank, which is available on amazon.in for Rs. 8,999.00. 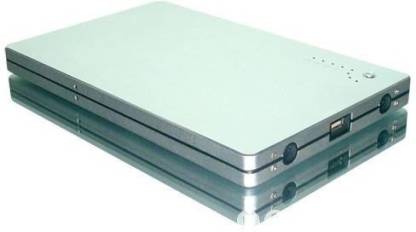 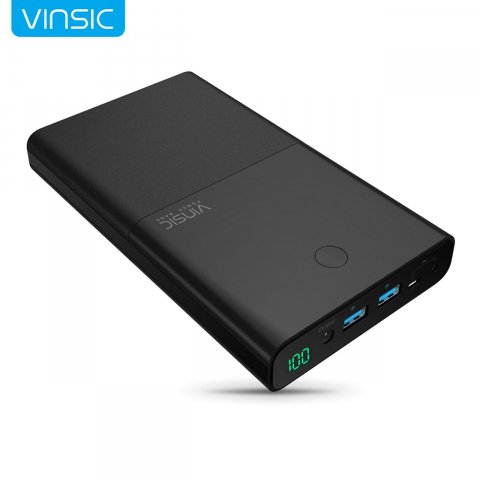 Another power bank with a large capacity is the 30,000 mAh power bank by Vinsic, which has a lithium polymer battery, an output interface of type C, input interface of USB type C and a micro US. Its, dimensions are 21 x 10 x 3 cm and weighs 750 gm. It has dual output ports and power of 5V / 2.4A is being provided as the output from this power bank. It also shows the battery consumption on a digital display and can easily charge your laptops and notebooks. This is available on onshopdeals.com for Rs. 9,451.00.

Invest in a Case for Your Power Banks: 3 Best Buys 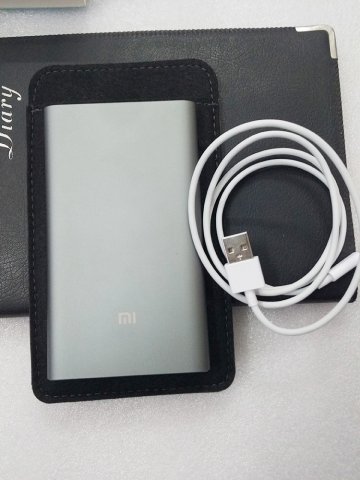 A power bank needs care and safety like any other digital device or gadget, thus special cases and covers are being designed to keep the power bank safely and protect them from dust and damage etc. 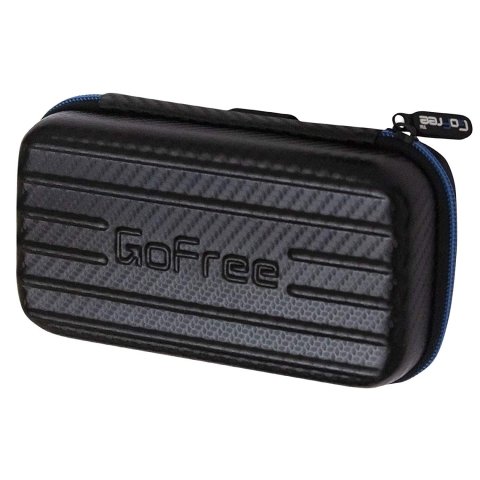 This beautifully designed carry case can be used to keep you power bank, cables, charger and all other small items like micro SD card, pen drive, earphones etc. It supports all power bank sizes within the capacity of up to 20,000 mAh. It keeps them safe in its hard and reinforced shell, while the inner part of the case is made of soft mink fabric which protects the gadgets protection from external bumps and getting scratches. The outer part has a ‘Go Free’ logo which makes it look cool. This carry case is available at amazon.in for Rs. 589.00. 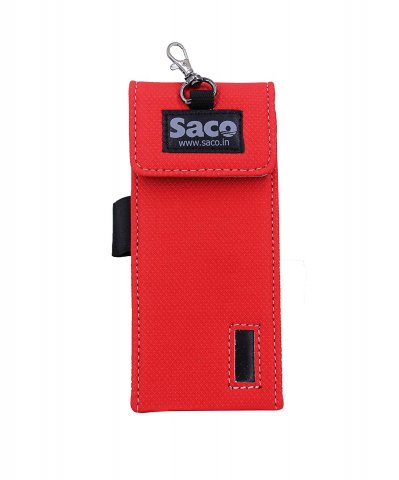 This Pouch case can accommodate power banks with up to 10,000 mAh capacity. It also has a back flip along with a elastic band, which can easily hold your mobile phone. The attractive and useful pouch for power bank by Saco is available for Rs. 310 at amazon.in.

Carrying A Portable Charger On A Flight

Though the main purpose of a portable charger is to provide non-stop power supply while on the go, you still need to check the regulations of carrying it on board, as the power banks to be used on board should have charged capacity of 27,00 mAh or less. Also the device can not be placed in your checked luggage, you can either carry it in your hand luggage.