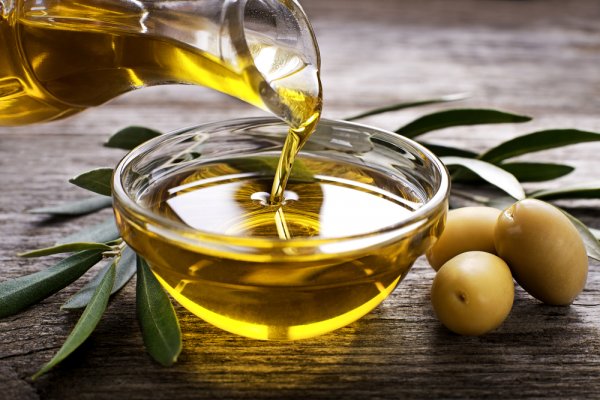 Bring the Goodness of Olive Oil into Your Daily Life. Everything You Need to Know about Olive Oil and the Best Olive Oil Brands in India (2020)

Olive oil can be used in numerous ways in your daily life and has tremendous benefits for your health. You can use olive oil for cooking, skin-care, hair-care, etc. If you are new to olive oil then this BP Guide will help you learn everything there is to know about it and the top olive oil brands in India, so that you can choose the option which is best suited for your requirements.

Much More than Just Oil 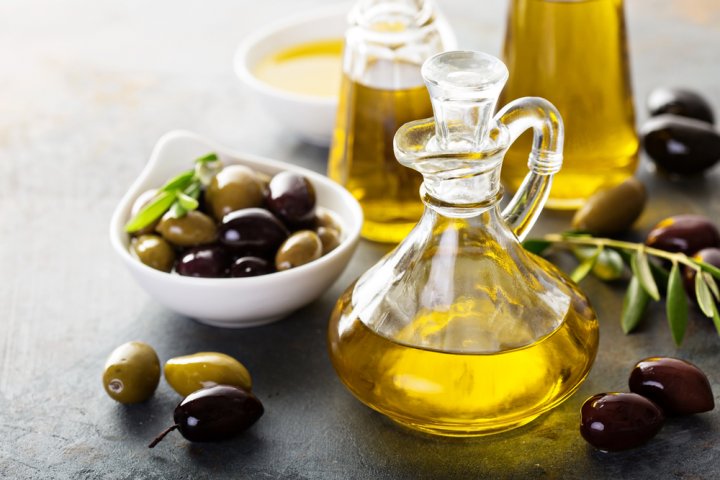 Olive oil has quite a bit of history associated with it. The mention of olives has been recorded as early as 8th century BC and it is featured heavily in the histories and cultures of the Mediterranean Basin especially in ancient Greece and Rome. Olive oil was a common ingredient in the cuisines of ancient Greece and Rome and is still used as much, if not more, in the cuisines there. The use of olive oil is not restricted to just cooking; it has been used in medicinal concoctions, in ancient religious rituals, as a fuel in oil lamps and even in the manufacture of soaps.

The 7th century bought a new use for olive oil – the cosmetic use. It was during this time that olive oil was used as a skin care product for the first time. For thousands of years and continuing, olive oil has been used to serve a variety of purposes. Its benefits are countless, and you should consider making it a part of your daily life if you haven’t done so already. 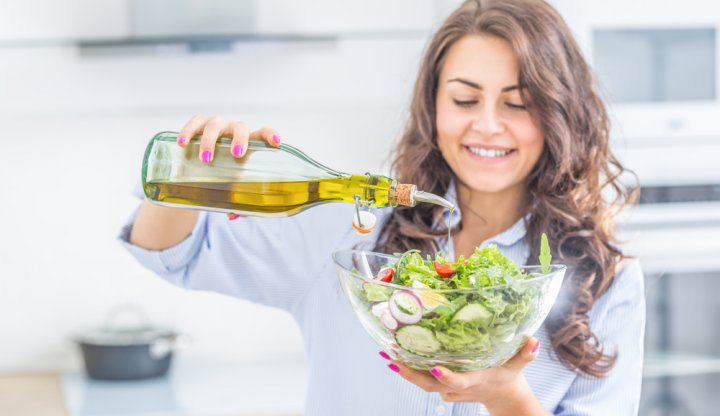 Olive Oil is a Juice 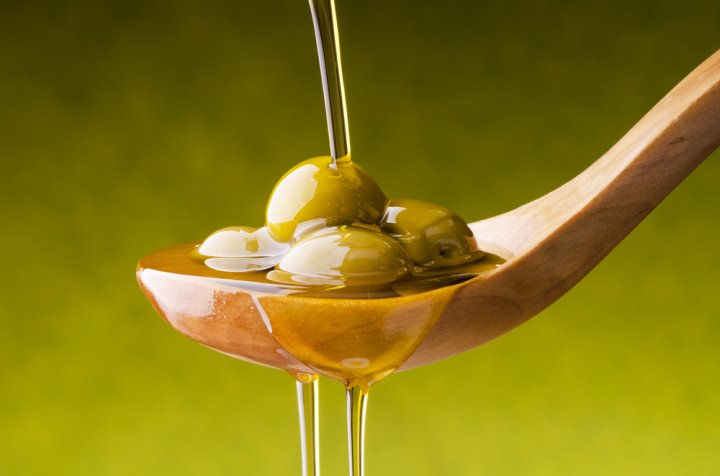 Raise your eyebrows as much as you like at this but it is a fact. Olives are a fruit and the liquid that is squeezed out from a fruit is called a juice. Olives are crushed like oranges and lemons, and the juice is extracted. Fruit juices taste the best when consumed right after extraction and production. The same goes with olive oil. Spain, Not Greece is the Biggest Producer of Olive Oil Greek cuisine is incomplete without olive oil and it is pardonable to think that this island country must be the largest producer of it. But it is not so. 95% of the world’s olive oil is produced by the Mediterranean countries and Spain leads that production. The Greeks are the largest consumers of olive oil. Andalusia possesses the ideal climate for olive trees to grow and the champion province in Spain that produces the most olive oil is Jaen with 70% of supply coming from there. Greece consumes more olive oil than any other country in the world. A single person in Greece consumes about 20 litres of olive oil per year. The second and the third largest consumers are Spain and Italy respectively. Spain consumes about 13 litres per head per year and Italy consumes about 11 litres per head per year.

Olive Oil Can be Harvested Only Once a Year Olives take a lot of time to grow and hence olive oil harvest is possible only once a year. Harvesting is done when the olives are in their best condition so that the olive oil extracted will be of the best quality and its acidity level is at its lowest. Harvesting usually starts in October and continues till end of December. Early harvested olives have exceptionally high levels of polyphenols and antioxidants. Ripe olives produce more oil but the oil is lesser in terms of quality.

A Single Olive Tree Can Produce 4 Litres of Oil 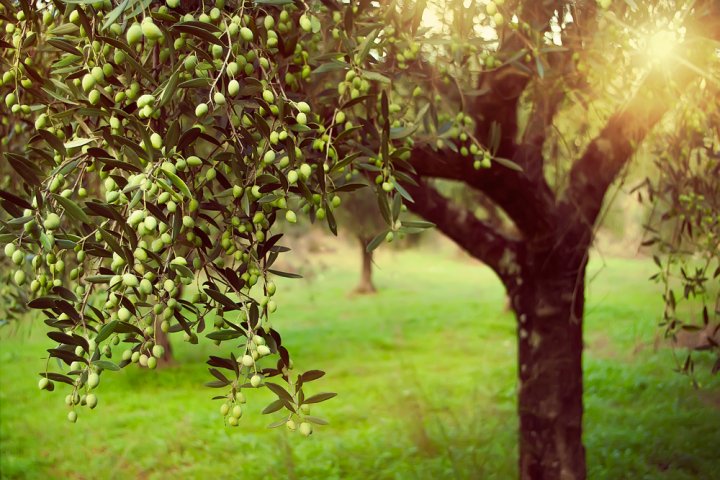 A single olive tree can produce 30 kilograms of olives a year. That translates to 4 litres of olive oil production annually per tree. The quality and taste of olive oil depends on the two important factors, namely the maturation and variety of the tree. 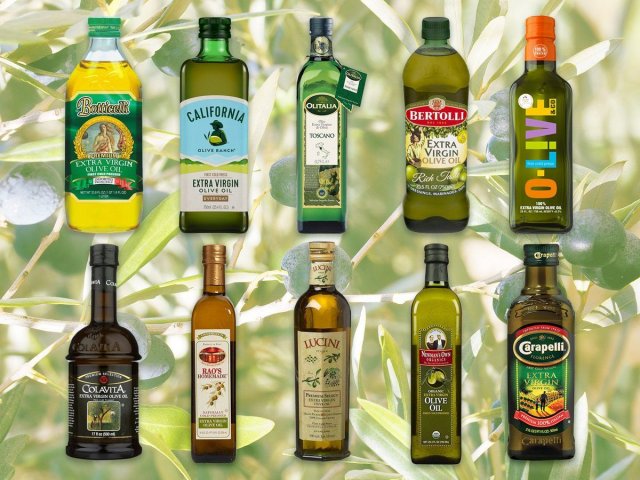 Olive oil is more than just interesting facts. It has many health benefits and is a good addition to the Indian cuisine. Some Indian recipes are delicious but at the same time they are unhealthy due to the large amount of grease and oil that is used to prepare them. Olive oil is a healthy alternative to this grease and oil. It is also the best alternative for ghee and butter, so people suffering from high cholesterol, blood pressure and cardiovascular diseases do not have to give up entirely on parathas, puris, grilled chicken, etc. Following are the 10 best brands of olive oil that are available in the Indian market. Use this BP Guide as a reference to choose the best for you: 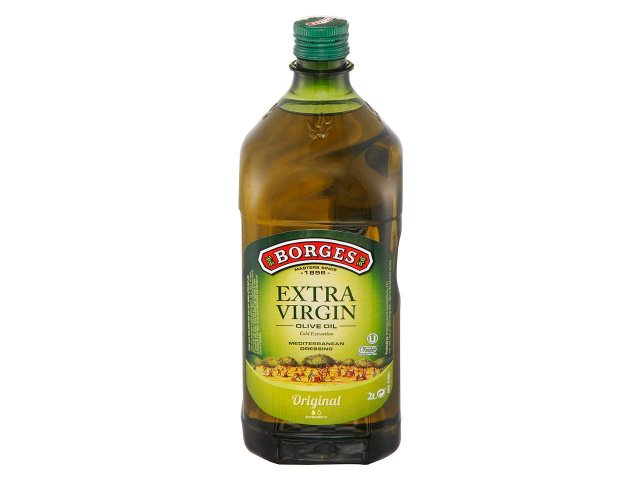 Borges Extra Virgin Olive Oil is the perfect dressing to go with your salads. Produced and packed in Spain, it has the true essence of the Mediterranean in every drop. This brand of olive oil will service you on those days when you want to sample some Mediterranean fare. Besides, Borges Extra Virgin Olive Oil is a healthier substitute for ghee and butter. So, you can enjoy those delicious parathas without affecting your well-being. This bottle contains 2 litres of extra virgin olive oil which has a shelf life of 24 months. It comes at a price of ₹ 2,600.00 on Amazon. 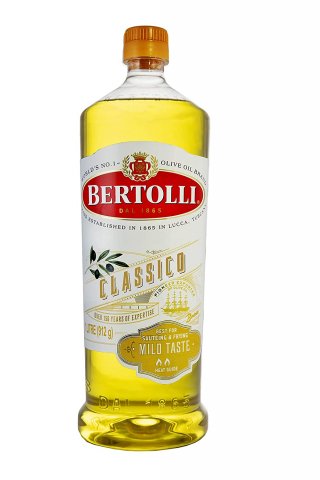 Bertolli olive oil originated in Spain and is the world’s best brand of olive oil. Its premium quality and rich taste are renowned across the globe. It possesses a mild taste which makes it ideal for all purpose cooking and perfect for sauteing and frying. This olive oil is rich in omega-9 unsaturated fat which is salubrious to your cardiovascular system, so you can savour puris, parathas, tandoori chicken and the likes without having to compromise on your health. It is also free from argemone oil. This bottle contains 1 litre of Bertolli olive oil and costs ₹ 1,225.00 on Amazon. 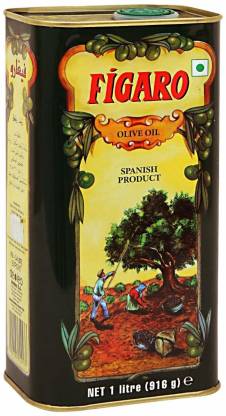 Figaro olive oil has a smooth taste, a pleasant aroma and a beautiful golden hue. This olive oil is multi-purpose as you can apply it on your skin and hair besides using it for cooking. The formula is rich in antioxidants and is mild enough to suit all skin types. Regular application on your body can give a smooth and glowing skin. This oil is also good for the heart, thus you can enjoy deep fried delicacies without affecting your health. Figaro olive oil comes in a tin jar containing 1 litre of the product. It comes at a price of ₹ 925.00 on Flipkart. 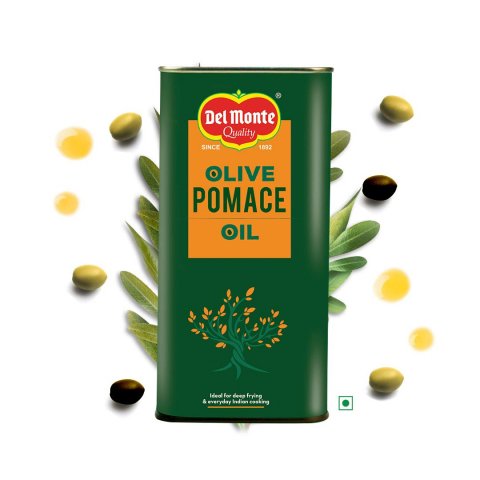 Del Monte sells many varieties of olive oils but the best among them is their pomace olive oil. Pomace oil is the juice that is still left in the olive pulp after the virgin, extra virgin and olive oils have been extracted. It is a flavourless oil and is useful in the making of dishes that don’t need the oil to impart any flavour to them. This brand of olive oil has a subtle aroma. It has a high boiling point, thus it is perfect for frying food. It is of the finest quality and contains no preservatives. The tin jar contains 5 litres of oil and comes at a price of ₹ 3,900.00 on Amazon. 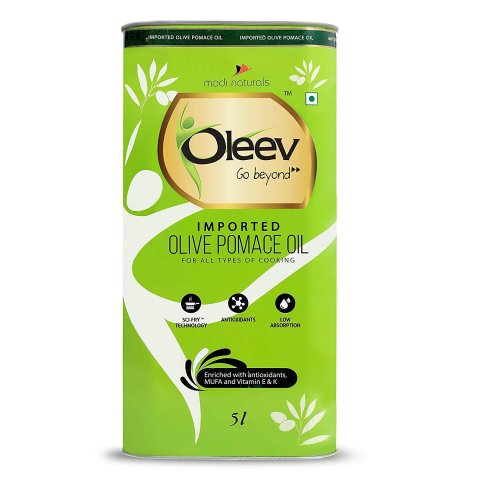 Oleev Pomace Olive Oil is another brand of pomace oil that originated in Spain. It is a light and natural oil that is perfect for everyday cooking and is neutral in flavour. This olive oil is ideal for Indian cuisine as it is healthy but at the same time doesn’t compromise on the heavenly taste of Indian food. Oleev Pomace Olive Oil is packaged in a tin jar that contains 5 litres of oil. It has a shelf life of 9 months and comes at a price of ₹ 3,999.00 on Grofers. 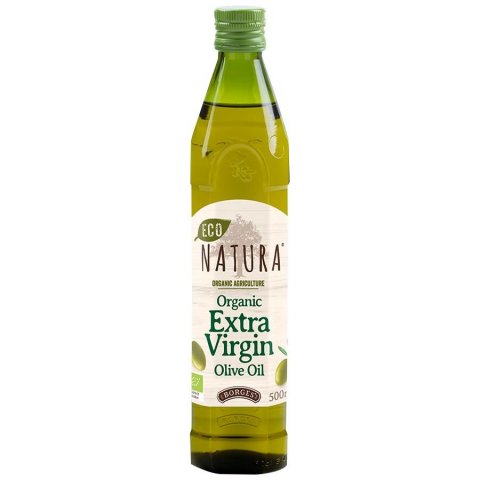 Eco-Natura is a division under the Borges brand that manufactures organic extra virgin olive oil. It is produced in Spain and the manufacturing process is entirely organic with no chemicals involved. This oil is extracted from organically grown olives using cold-pressed method. Regular consumption of this organic extra virgin olive oil will reduce the risk of heart diseases and type-2 diabetes. You can consume it directly or in salad dressings and marinades. It is not ideal for cooking as extra virgin olive oil has a very low smoking point. 500 ml of Borges Eco-Natura Organic Extra Virgin Olive Oil comes at a price of ₹ 800.00 on Big Basket. 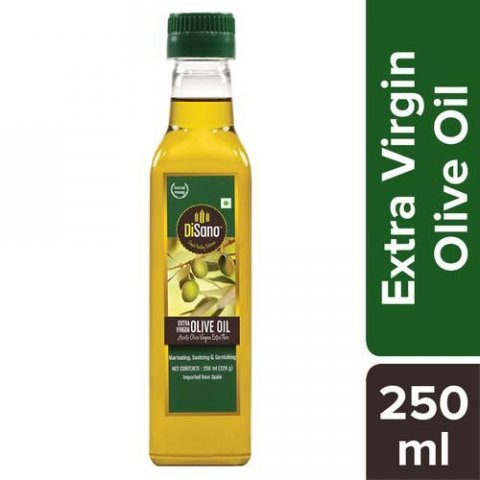 DiSano Extra Virgin Olive Oil has a strong aroma and taste. The oil is extracted after cold pressing carefully selected, quality olives. It is great for salad dressing, marinades, flavouring and shallow frying. DiSano Extra Virgin Olive Oil is exclusively for those of you who love the taste and aroma of olives and would like to have them in any dish you have. 250 ml of this oil comes at a price of ₹ 275.00 on Big Basket. 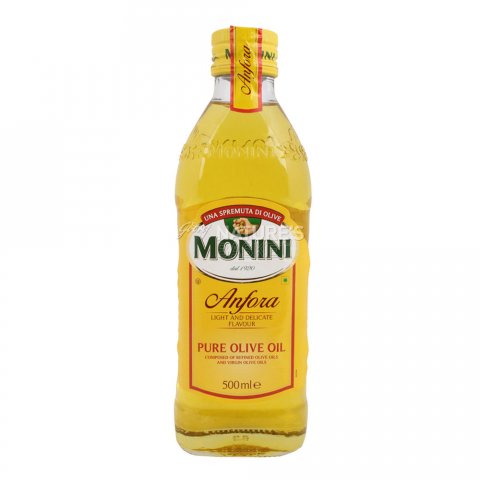 Monini is a brand owned and run by an Italian family, thus you need not doubt about the homely taste of the product. The formula was created in 1920 by the current owner’s grandfather using the best olives acquired from Italy and other Mediterranean countries. The same pioneering formula has been carried on by the family like a treasured tradition and they completed 100 years of making the number one extra virgin olive oil in Italy. Monini extra virgin olive oil is the original pure olive oil that has a rich aroma and a distinct taste. 500 ml of this product costs ₹ 1,300.00 on Nature's Basket. 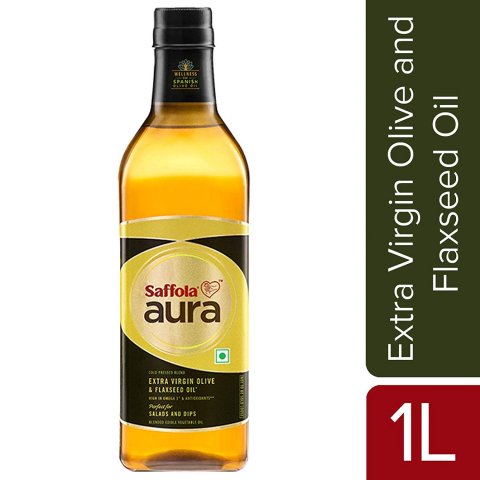 Saffola Aura Extra Virgin Olive Oil is rich in antioxidants and omega-3. The formula also includes the benefits of flaxseed oil. There are many benefits of consuming Saffola Aura Extra Virgin Olive Oil, the chief among them being that it helps in renewing body cells, promoting good cholesterol and reducing body fat. It is perfect for daily cooking especially for stir frying, sauteing, grilling, roasting and baking. You can also drizzle it on your salad as a dressing or use it as a marinade. You can get 1 litre of this product at a price of ₹ 1,050.00 on Nature's Basket. 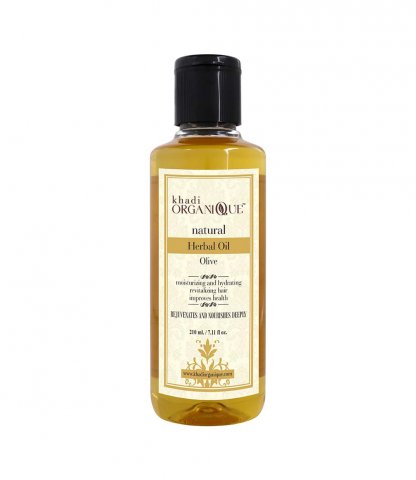 Khadi Organique Extra Virgin Olive Oil is a homegrown product. It originated in India and is by far the best suited olive oil for Indian skin, complexions and hair. It is made from cold pressed, pure olive oil and is great for body massages and hair. It suits all skin types. The formula contains anti-inflammatory properties and large amounts of antioxidants. It also has hydrating squalene and anti-ageing properties that makes it the best remedy for skin, nails and hair. You can also apply it on the eyelashes. 210 ml of this product comes at a price of ₹ 300.00 on Flipkart.

Olive oil is undoubtedly a far better and healthier alternative to regular cooking oils and mediums normally used in Indian cuisine. We hope this BP Guide would have helped you understand the best brands available in India and decide which one is optimally suited for your requirements. Stay connected with us for more such engaging content.